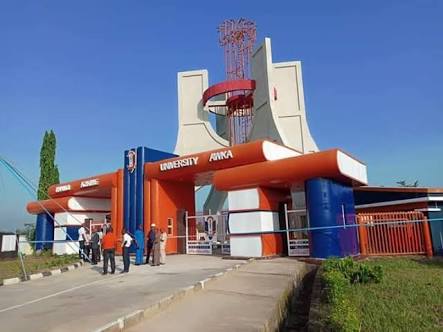 My attention has been drawn to a very malicious and libelous video which has gone viral, where some misguided youths, either acting out of mischief or sheer ignorance, went on a demonstration to the Office of the Vice Chancellor, Nnamdi Azikiwe University, Prof Charles Okechukwu Esimone FAS, falsely accusing me of marginalising the village, according to them, in the ongoing massive employment in the University.

Since then, my house and my phone have been besieged and inundated with visitors and callers, some even threatening my livelihood and my life.

I expected the University Management or the University Governing Council to immediately issue a rebuttal and official rejoinder to save an innocent person from the unprecedented and unimaginable embarrassment I have been subjected to.

Both, unfortunately have failed when it mattered most creating the veritable platform not only for a lie from the pit of hell to gain ascendancy and currency, but also the suspicious scenario that a “fall guy” is being set up for prosecution and persecution by his own People, and even Staff of the University, who I represent in the University Governing Council through Congregation.

It is therefore with pain, but profound sense of responsibility that I make the following declarations namely :

a) That I have not been involved, not in charge of any recruitment whatsoever for Senior and Junior Staff of our University,

b) That I have not been given either by Management, or the Governing Council, any employment Quota for any village or Community in Awka,

c) That during the last Council Meeting last year, I protested vehemently the treatment given to Awka People particularly with respect to reserving a certain percentage for host communities as obtainable in other institutions,

d) Arising from my Protestations, Council in its wisdom set up a 3 Person Committee of Council , comprising Prof Au. Nnonyelu, Chair, Prof Ngozi Anyikwa, Chinedu Eliyahs, and Mrs Ogo Okolo as Secretary, to draw up modalities for the recruitment of Junior Staff. The Committee met a number of times and submitted its initial report to the Council before the nationwide ASUU Strike, and the COVID-19 Lockdown.

e) Since then, I have not attended any meeting whatsoever outside the extraordinary Council meeting called in honour of our late Colleague, Prof O. O. Udemezue, the Provost College of Health Sciences, Nnewi Campus.

I have also not attended any meeting in the Vice Chancellor’s Office, or carried out any official function whatsoever relating to employment.

When I got wind of what was happening, I called the VC’s attention to it, his response, in fairness to him, is , Prof, when I asked after you, I was reminded that you are on strike, and knowing your convictions, I did not want to bother you.

f) It is therefore wicked, ungodly and provocative for anyone to seek to desecrate my name, attack my integrity, the priceless possession that is emblematic of who I am, bring my hard earned reputation down to be trampled upon, expose me to danger, hatred, public odium and ridicule.

g) The 31 years I have been teaching in this university have been characterised by selfless service, speaking and standing in defense of the interest and welfare of staff, sometimes at the pain of serious attack. I have also not shied away from defending vigorously the legitimate concerns and interests of Awka people, who gave their land freely, used their own money to pay for the University rent at the then temporary site of the University. I am still at a loss why I have been maligned so mercilessly.

Let it be known that I, Prof Au. N. Nnonyelu has not been given any quota for anybody, and also not involved in any recruitment exercise under any guise. I am still in pains.