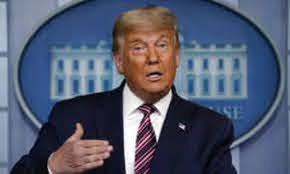 The General Services Administration has informed the Biden transition team on Monday evening that the Trump administration is ready to begin the transfer of power.

GSA head Emily Murphy wrote in a letter that federal government agencies will now make resources available to the Biden team in preparation for the incoming president’s assumption of office. The GSA is an independent government agency that helps manage and support the federal bureaucracy.

President Trump has refused to publicly concede defeat in the general election, and up to now his administration has refused to work with the Biden transition team. However, the president wrote on Twitter that he had allowed Murphy to approve the transition.

“Our case STRONGLY continues, we will keep up the good fight, and I believe we will prevail!” Trump wrote. “Nevertheless, in the best interest of our Country, I am recommending that Emily and her team do what needs to be done with regard to initial protocols, and have told my team to do the same.”

“I was never directly or indirectly pressured by any Executive Branch official—including those who work at the White House or GSA—with regard to the substance or timing of my decision,” Murphy wrote. “I did, however, receive threats online, by phone, and by mail directed at my safety, my family, my staff, and even my pets in an effort to coerce me into making this determination prematurely.”

Murphy’s decision gives Biden around $7 million in federal resources to aid the transition.

The Biden team announced that they had received Murphy’s notice and would prepare accordingly.

“Today’s decision is a needed step to begin tackling the challenges facing our nation,” the transition team said in a statement. “In the days ahead, transition officials will begin meeting with federal officials to discuss the pandemic response, have a full accounting of our national security, and gain complete understanding of the Trump administration efforts to hollow out government agencies.”