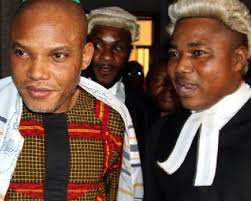 I am eternally grateful to my Client, my brother and friend Mazi Nnamdi Kanu the Supreme Leader of the World’s largest freedom movement, (IPOB) whose prompt intervention using all available platforms to proactively stopped the danger staring on my face at that point in time, and when it mattered most.

I also wish to thank the members of this noble movement/FAmily for standing tall and proactively too when it mattered most in my life. Daalu nu Umuchineke.

I must deeply appreciate the untiring efforts of my Client, friend and in-law, Chief Femi Fani Kayode for defying sleep at that wee hours of the night when he got the SOS from me, to alert the World and those that mattered on the bloody attack/invasion of my peaceful home by those whose primary duty is to secure lives and properties. He has remained consistent in updating the World on developments so far. I can’t thank you enough Sir.

I want to specially thank my people of good conscience, particularly the members of my noble Association (NBA), the erudite President of the Bar (Mr. Olumide Apata) who was consistently checking on me and keeping touch at the hit of this turbulent hours.

My thanks also goes to our indefatigable Chairman of the NBA Abuja Branch (Mr. Bulus Atsen) who was relentless in his bid to ensure that truth is not swept under the carpet. He is more than a brother. I will not forget to appreciate my own brother and friend , who has always been with me in defending this noble Family -Bar Nnaemeka Ejiofor.

Contributions of the Inter-Society, and Civil liberty Organization Onitsha, Eastern Nigeria, Ably led by my brother and friend, the fearless Chief Emeka Umeagbalisi, in raising the first alert/security concerns on the safety of my life cannot be overemphasised. He has always been there for me anytime anyday, I cannot thank him enough.

The members of the print, social and television space who widely reported and in one accord roundly condenmed this crime against humanity are deeply appreciated.

Very unfortunately, the well planned premeditated attack on my ancestral home resulted in the brutal murder of my long standing personal Aid (Mr. Samuel Okoro aka Gentle Biggy), who was shot and consequently injected with lethal substance before being set ablaze in my car, which the demons in uniforms made away with on this black Sunday, 6th June 2021, and I say, may your death never go in vain. Avenge your death from wherever part of the heaven you may be. Be assured that your death can never be in vain.

This press statement will be as brief as it can, because it is scheduled to come in batches with development of time. But, be assured that I have more than enough evidence to demonstrate to the World that the uniformed invaders/assailants actually came to assasinate me and every living object in my ancestral home, *unprovoked* for the second time in less than two years, in the wee hours of Sunday, 6th June 2021.

I had waited for 24 hours for those that invaded my home to tell the world their true mission to my peaceful residential home in Umunakwa Ifite, Oraifite, Ekwusigo LGA of Anambra State, but nothing is forthcoming. Hence, mine will be coming in stages as I had assured.

I have always been more frequent at home for the past few months, not because I was coming for any special ceremony but discussions on achieving lasting peace in our region, which process had yielded appreciable success/results.

Ostensibly offering solutions for lasting peace which Sheik Gunmi who is effectively but brazenly aiding, abetting and benefiting from the proceeds of heinous activities of Boko Haram, Fulani Herdsmen and bandits cannot offer, but still protected by Security Agents of the state.

These meetings have always been to the knowledge and commendation of all Relevant stakeholders whom I may not mention in this part of my press statement.

Interestingly, the now late Mr. Samuel Okoro who was my personal Assistant had always been with me. I risked my life, abandoned my lovely family to travel home more often because of my desire for a total peace that will bring to an end, the entire hostilities in our region.

Upon my return home on Saturday, 5th June 2021, I was informed that the Catholic Arch Bishop of Onitsha Province (Most Rev. Valerian Okeke) wanted to see me in a meeting which I thought would be a private one.

I honored this invitation where His Grace raised a number of pertinent issues and consequently, commended me for my untiring efforts toward achieving peace in our region. His Grace prayed for me and equally offered further useful advise. We agreed for a formal meeting where major stakeholders will be notified and equally be represented. I left the Bishop’s court, but not until His Grace blessed me for the umpteenth time, and prayed for me and my friend who was in my company.

I drove back home in my red Toyota Car, the same car the criminals in Security Uniforms stole from my house during their bloody invasion/attack on my home, and inside the same car my PA and car itself were set ablaze.

I have no doubt in my mind that His Grace will be distraught to hear that the very fine gentleman (Mr. Samuel Okoro) he prayed for on Saturday was brutally murdered by agents of darkness, in less than seven hours after visiting him.

Due to traffic situation in Onitsha at that time of the day we left the Bishop’s court, we spent hours trying to manover the traffic and got home eventually at about 8.30PM in the night. I was gravely worn out after a long journey and decided to shower and sleep, in preparation for another meeting coming up the following morning at 10:00AM.

I was in deep sleep when the demons struck. The barking of my security dogs and sounds of gun in and around my home could simply tell me that there is danger and unusual movement in my peaceful home.

Initially, I couldn’t fathom what the problem could be but what I know and can tell the public on this part of my press release is that they will hear it all with impeccable evidence to demonstrate the atrocities that was committed in my peaceful home by paid agents of darkness.

I saw as it all happened, it was like a movie. I saw and overheard them directing my domestic staff who never resisted them in any manner to take them upstairs where their Oga was sleeping at the time, but my staff kept on telling them that “Oga is not in this house”. Shooting and heavy beating were simultaneously going on, the time was 2:30 AM in the morning. I saw Biggie on the ground being beaten and shot at, before somebody, presumably a Medical Doctor in their company, injected him with what I believe to be a lethal substance.

The lifeless body of Biggie was dragged on the floor of my compound to my parked car. My driver who apparently was in possessions of my car keys at the time was ordered at gunpoint to produce to open the booth of the car where his body was dumped.

Efforts by these band of murderers to access where I had hidden in order to finish the job for which they came proved abortive as they couldn’t breach the multiple bullet proof doors leading to where I took refuge. The Native Doctor they brought along with them, was armed with all sorts of charms and he was busy making incantations and directing them to where he felt I was.

Midway into their murderous invasion of my home, their search for me was suddenly stopped and they consequently vanished with my harmless and innocent staff they abducted including the lifeless body of Biggie. These evil men left my house around 3:45 AM having killed, vandalized and terrorized my household for over an hour and 15 minutes.

They stole my car and left my home along with over 15 Hilux Vans, Toyota Hiace buses and Armored Personnel Carrier, they came with. On getting to Okacha filling station in Neni, they dragged out my elder brother Mr. Joel Ejiofor who was equally abducted during the invasion and directed him to disappear from their sight.

It was after my brother left, that my car was set ablaze with Mr. Samuel Okoro inside the car. He was not only killed by these soulless beasts, his body was burnt beyond recognition. I wish to ask that directed this criminal and deadly invasion of my house, to tell me what crime Samuel Okoro committed.

For the records, late Mr. Samuel Okoro hailed from Ebonyi State and has been with me for the past four years. He was a brother, a dependable friend and a refined gentlemen. I will forever miss him.

While struggling to control myself at this point in time, I am indeed broken and traumatized, not that I committed any offence known to law or that Samuel Okoro even did anything wrong, but because he was murdered in the most bizarre, barbaric, brutal and heinous manner.

For the records, I have been the General counsel to IPOB and Mazi Nnamdi Kanu since 2015. Illegal Proscription of IPOB is a subject of Appeal and further pronouncement hasn’t been made on that by a superior court of records.

It will shock you to know that the average Igbo man is a member of IPOB by position of birth. I will discuss this topic in detail in the next batch of my press statement.

The questions begging for answers which I want the invaders to answer are:

1) Who sent them to my ancestral home because they carefully monitored me until I moved in on that fateful day?

2) I spent virtually a week in Abuja before returning home, why didn’t they arrest me in Abuja where I live or even invite me to appear before them for questioning if I was being investigated for committing any offence?

3) Why my home for the second time?

5. Who funded this bloody exercise? Who is actually after my life?

4) Why the invasion of the residence of a Senior member of the Bar at such an ungodly hour of the night?

From what I gathered, the sinister purpose is clear, the directive is clear, arrest him alive or dead and burn him alive. I will give further details on this subsequently.

Can we take it that some elements who are hugely benefiting from the hostilities in our region is after my life, apparently they are enjoying the present genocide going on in the South East which my intervention was designed to curtail?

Interestingly the Anambra State Police Commissioner confirmed to me that he was never aware of the operation. How did these killers in army and police uniform drive all the way from Abuja to Anambra to unleash mayhem without notifying the CP of the state?

I therefore, demand for the immediate and UNCONDITIONAL RELEASE of my domestic staff abducted from my home during this unprovoked attack.

Furthermore, I call on the Inspector General of Police, Chief of Army Staff, Director General of State Security Services and the Director General of Nigeria Security and Civil Defense Corps to immediately investigate their personnel that invaded my peaceful home, killed, stole and destroyed my valuables. The perpetrators of this evil SHALL be publicly named and prosecuted without further delay.

My next press statement will be issued in the coming days.

Thank you all people of good conscience for standing firmly side by side with me in this yet another trying period, Your prayers has been impactful and effective. May the gentle soul of Samuel Okoro (Biggie) have eternal rest in the bossom of Our Lord Jesus Christ Amen.