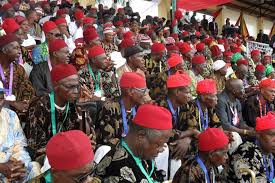 1. We feel greatly worried by the recommendation of the Bala Mohammed Committee, set up by the Peoples Democratic Party (PDP), to review the party’s performance in the 2019 Presidential election. In summary, the review panel recommended the scrapping of zoning for the PDP presidential ticket in 2023. The PDP after receiving the Panel’s report set up what it called a technical committee to review the Panel’s report and get ready for adoption.

2. We are aware of the surreptitious moves within the party to zone its presidential ticket to the North. That explains why the Bala Mohammed Committee mentioned North East particularly for consideration if zoning must be contemplated at all by the party.

3. For those who missed the panel’s report, permit us to refresh your minds with some excerpts, and we note: the Bala-led Committee predicated this wacky decision on the need to get the best hands to pilot Nigeria. Bala’s rambling speech read in part: “In line with certain unwritten conventions of the nation’s history, many people think that for fairness and equity, the North-East and South-East geo-political zones that have had the shortest stints at the Presidency should be given special consideration in choosing the presidential flag bearer of the party for the 2023 election.

4. “While we admit that this is a strong argument, we should not lose sight of the fact that Nigeria is endowed with many capable and very experienced leaders in every part of the country. “Moreover, the exigencies of the moment demand that nothing should be compromised in choosing the leader with the attributes to disentangle the country from the present quagmire. “Therefore, we think that every Nigerian from every part of the country should be given the opportunity to choose the best candidate through a credible primary election, as a way of institutionalizing a merit-based leadership recruitment process for the country.”

5. We therefore believe that this panel’s report, contradicted itself and threw both caution and constitution of the PDP into the gutter by recommending that PDP presidential ticket be open to all Nigerians, and an all-comers affair.

6. For the avoidance of doubt, permit us to quote the PDP constitutional provision on zoning. The rotation and zoning principle was engrained into the PDP party’s Constitution in 2009. Article 7 (2) (c) of the PDP Constitution states: “In pursuance of the principle of equity, justice and fairness, the party shall adhere to the policy of rotation and zoning of party and public elective offices, and it shall be enforced by the appropriate executive committee at all levels”.

7. So, in line with this express provision of the PDP constitution, since power has resided in the North for two straight terms it has to move South, specifically to South East, in the spirit of rotation and zoning, which has been the practice since 1999. All the political parties ought to flow with this national understanding. PDP, APC, and other major parties cannot be moving North when power is supposed to be moving South, if they hold the unity and continued corporate existence of this country dear to heart.

8. This report has attempted to repudiate the principle of zoning and rotation of the presidential seat between North and South Nigeria, which has brought so much stability and sanity to the polity since the return of the country to democratic governance in 1999.

9. Such party leaders pushing for the jettisoning of zoning and rotation of Presidential seat when their zones have filled the office based on the same principle, are promoting injustice in an unhealthy and ungentlemanly equivocation, which goes to reinforce the belief by many that there is no honour and decency in politics in Nigeria, particularly in the PDP. You recall that a one-time governor and now senator once called the PDP “Papa Deceive Pikin” and rightly so.

10. We in ILDF can only remind such leaders in the PDP and indeed in all political parties who now believe that zoning no longer matters, to refresh their minds and recall that the one reason the PDP lost power in 2015 was because of repudiation of zoning which presupposed that the North should complete its eight years under former president Umar Yar’dua. We need not remind those politicians who believe that the PDP will return to power at the center through elite conspiracy to read the handwriting on the wall and see a repeat of history in the making. The protest votes, which swept the PDP out of Aso Rock is fermenting again and the leaders who are goading their Political parties along the inglorious path have only themselves to blame if they do not perish the plot forthwith.

11. ILDF wants to place on record that we recognize the fact that all these surreptitious moves to scuttle zoning in the political parties is aimed at stopping the South East from producing the President of Nigeria in 2023, being the only zone yet to take a turn on that count in the Southern part of Nigeria.

12. Consequently, we call upon the critical stakeholders of the PDP in particular and all the other political parties and indeed all well-meaning Nigerians to urgently and publicly denounce the Bala Mohammed report.

13. ILDF wishes to warn that there will be consequence if our efforts at promoting peace and unity in Nigeria through dialogue is sabotaged; and if the hope and aspiration of the South East to produce the President of Nigeria in 2023 is frustrated and unduly dashed through such machinations.

14. In specific terms, the ILDF will go all out in mobilizing the South East to get even with any political party which believes or acts as though the South East does not count in the current political equation.

15. It will be recalled that the Igbo Leadership Development Foundation, in its pursuit of peace and national unity, organized a National Conversation – The Great Debate for National Unity, which focused on Federal Character, Restructuring and Rotation of Presidential Power in Nigeria. That historic event held on March 5, 2020 at Sheraton Hotel Abuja, organized by ILDF in collaboration with Gregory University Uturu, New Generation Leadership Development Foundation and Center for International Advanced Professional Studies, Lagos.

16. We will continue to preach unity, equity and fairness in the relationships among ethnic nationalities in Nigeria, including the rotation of Presidential power in our polity.

18. As you are aware, the Foundation is, at the moment, promoting the emergence of a Nigerian President of South East extraction in the 2023 General Elections. The simple reason is that the South East is the only geopolitical zone in Southern Nigeria that has not produced a President for the country in the present democratic dispensation.

19. For practical purposes, the ILDF has been consulting and searching for the “best of the best”, of south east extraction, and has narrowed the search to four personalities. ILDF is proud to announce that it has come to the conclusion that any of these four great Igbo sons will make great President of Nigeria, of South East extraction, and they are as follows in no particular order:

1. Senator Anyim Pius Anyim, former President of the Senate, Federal Republic of Nigeria, and Former Secretary to the Government of the Federation

20. We believe that the emergence of a Nigerian President of South East extraction is not only long overdue, but also a win-win; and most auspicious at this point in our nation’s history, as it would complement the post-war Reconciliation, Rehabilitation and Reconstruction policy of government and cement our nation’s unity. We firmly believe that full Re-integration of the South East into the nation’s polity, which was unfairly left out among the ‘3Rs’, will be best achieved by electing a Nigerian president of South East extraction.

21. The emergence of Nigeria President of South East Extraction will also douse the nerve of separatist agitation by people who strongly believe, rightly or not, that Nigeria has continued to deal unfair blows to the people of South East because of the civil war.

22. At this point in Nigeria history, the power-givers and power influencers are expected to use the Obasanjo / Falae formula to zone the Presidency to the South East in 2023.

23. We wish to seize this opportunity to thank the growing number of patriotic citizens from all parts of the country who have thrown their weight behind the push for the emergence of Nigerian President of Igbo extraction.

24. Any political party which chooses to ignore this prevailing national political sentiment does so at its own peril; and should be prepared to forgo the support of the South East in particular and that of well-meaning Nigerians who believe in fairness, equity and justice in general.

25. We therefore emphatically conclude: The Rotation Principle to South East to produce the next president for Nigeria in 2023 would be the political glue for continued peace and unity, and the smartest way forward in containing the lingering injustices against South East ; and lingering ill feeling over the Nigeria -Biafra civil war.

26. Thank you for your kind attention.