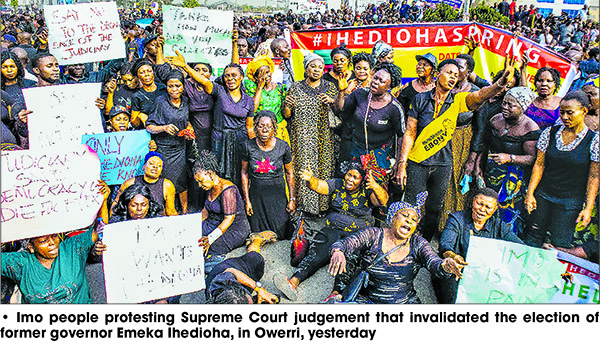 The South East, yesterday, erupted in protests as supporters of the Peoples Democratic Party (PDP) kicked  against removal of Mr. Emeka Ihedioha as Imo governor by  the Supreme Court.

In Anambra, protesters gave a seven-day ultimatum to the apex court to reverse itself alleging that Ihedioha was wrongfully removed.

The protesters dressed in black,  gathered at the party secretariat at Udoka Housing Estate in Awka, and marched through the Enugu-Onitsha Expressway, Aroma Junction, Alex Ekwueme Square up to Federal High Court, Awka, chanting pro-Ihedioha songs and expressing anger with the Supreme Court judges.

Addressing the protesters at the Alex Ekwueme Square, Nwobu, said what the apex court did amounted to daylight robbery.

“Once more, we have seen our nascent democracy under threat and it is our responsibility as true democrats to save the situation. We are not protesting the injustice meted on PDP, Imo and Ihedioha alone, but also protesting the threat posed to our democracy by the judiciary and the present administration. We urge lovers of democracy all over the world to join us in condemning the development. We urge the Supreme Court to reverse itself, because, tension is already building up as a result of the robbery called judgement.”

“What happened in Imo is a threat to our democracy, and it is our collective responsibility to speak against it before it becomes a norm. Our democracy was recently threatened in Kogi and Bayelsa. This time around, they also robbed us of Imo and snatched a mandate freely given by Imo voters to the PDP.”

In the same vein, Owerri, was shut down  by hundreds of  protesters angered by the sack of  Ihedioha by the apex court.

Supporters of the party from 27 local government areas stormed the streets black clothes to protest what they described as a miscarriage of justice and demanded that the court reverses itself.

The protesters carried placards with inscriptions as:  “Reverse the injustice now!”  “On our mandate we stand” Ihedioha won landslide,”  “Imo want Ihedioha.”

They marched from the party’s secretariat along Okigwe road to  Government House roundabout which was barricaded by the police.

Chief Okewuluonu Chris, chief of staff to Ihedioha, who addressed the protesters said it was legitimate to express anger and sadness  over the strange judgment of the apex court which truncated the mandate given to Emeka Ihedioha by the people.

He pointed out that it was not too late for the apex court to reverse itself and restore the  lack of confidence by the people in the judiciary.

“We are holding this peaceful protest to let the Supreme Court know that  what they had done to the people of the state is unprecedented miscarriage of justice and that they can  reverse the mistake. It is not in doubt that Ihedioha had won the election fair and square.  The petitioners had lost at the tribunal and Appeal Court where their petitions were thoroughly subjected to legal scrutiny and the courts had upheld that Ihedioha had truely won, but this strange judgement is a mistake, a gross injustice and should be reversed,” he said.

Also, Mr. Nze Ray Emeana, state secretary of the PDP, said judges of the apex court owe Nigerians an explanation as to how they arrived at the votes to declare Uzodinma  winner.

“Imo people are not happy with the fraudulent judgment which scuttled the mandate given to Emeka Ihedioha by the people. The supreme Court judges have curiously raised the valid votes from 714,355 to 927,030, which is even above the total accredited votes of 823,743 stated by the INEC. They apex court is yet to explain how they arrived at the difference of 103,887 which simply means that something is wrong.

“We are asking them to reverse what they have done because it is nothing but robbing Peter to pay Paul and Imo people will not accept that,” he said.

In Abia, protesters also trooped out in their hundreds.

State chairman of the party, Chief Johnson Onuigbo, said they gathered to express their anger over the  judgment against the former governor.

“Judges of Supreme Court can make mistakes because they are human beings. They made a mistake by denying the people of Imo their votes. They are not supposed to appoint the governor. The people elected their governor. The decision is injurious to democracy; it is an attempt to disrupt our nascent democracy,” he said.