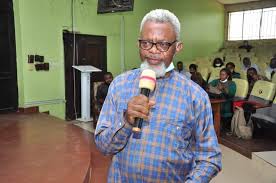 A Professor of Economics, Uche Nwogwugwu, says Nigeria’s economy is in bad shape and needs decisiveness on the part of the Federal Government to bring it out of the wool.

Professor Nwogwugwu who is the Dean, Faculty of Social Sciences, Nnamdi Azikiwe University, Awka, said the worsening economy needs more than the government is presently giving it to come to life.

“In fact, the curve is nearing the lowest point. Check the macro-economic indicators (level of unemployment, the rate of inflation, others things like exchange rate and the growth itself, the GDP).

“ The unemployment rate today is at a double digit of seventeen percent and is still growing.

“The nation’s productive system has not been able to engage those who are able and capable to work. Youths, who are the engine of growth of any nation, are unemployed”.

“What about inflation? A situation where N100 will buy you a thing of N10 value is not a good trend. It means that you need more money to get what you are supposed to get with smaller amount of money”.

Professor Nwogwugwu noted with dismay that the Central Bank of Nigeria, CBN, has been unable to manage the cash inflow into the system well.

The Don, while commenting on the recent rumoured printing of new money by the Apex Bank, described it as an indication of economic disequilibrium, which must be checked with the soaring inflation rate.

“When new money is printed without the backing of the real sector that produces it, there is a basic fundamental disequilibrium in the system.

“And when there is disequilibrium in the system, the system suffers greatly”.

“When inflation rises to certain level, it leads to terrible crisis which may eventually spell doom for the economy and the country.

“Unfortunately, the government doesn’t seem to be aware of the fact that these things are getting out of hand.

“Today, things that you bought N100 before are now sold at N200 or N300. The value of money has fallen more than hundred percent.
“It shows that government has lost its grips on the system” Professor Nwogwugwu regretted.

The Dean Faculty of Social Sciences, Nnamdi Azikiwe University, Awka also blamed the problem on government neglect of the productive sector of the economy, which is supposed to be empowered to produce at its maximum level, create employment for the teeming jobless youths and give value to the money.

“When the goods are not produced or supplied, what will you buy, even when you have all the money in the world?

The Professor of Economics, while challenging the economic advisers to the President to come up with strategies that will pull Nigeria out of the present economic mess, warned against printing new money, which he noted, has always attracted dire consequences, unless properly managed.

He advised the government to take a clue from world great economies, which are supply side countries, and are coping better with the global economic recession.

“Countries like Zimbabwe, Ghana before Rawlings both had the issue of having more money in the system. But, as we speak, most countries have been compelled to even revalue their money because they are losing value.

“So, the history is there to advice those taking economic decisions for us that emphasis on money doesn’t really help the system”.

“Most great economies such as America, Japan and China, are supply-side system. They emphasize on production, technology, research and development to produce new things and even exports for people of other countries to buy.

“They push those things here and we consume them. We become the biggest market to them. They take our money to fix their own economy”. The Don regretted.