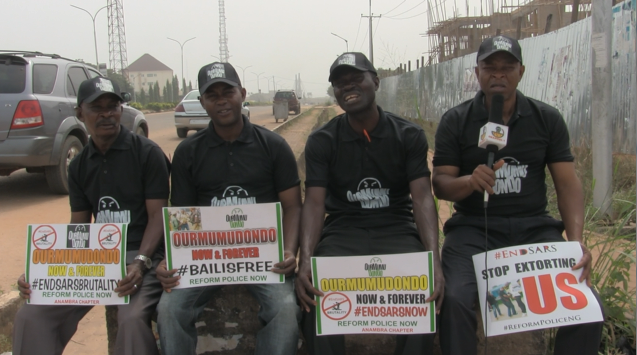 Anambra State Chapter of Ourmumudondo joined coalition of civil society organisation campaign on #EndSars#ReformPoliceNG.The group statement reads:
Nigerians have spent the last one week highlighting the travails many Nigerians suffer in the hands of the Special Anti Robbery Squad (SARS). The stories that have been recounted on social media include stories of torture, a lack of respect for the rule of law, extortion, extrajudicial murder and the disappearance of hundreds of people.
These actions are indicative that the Unit has outlived its usefulness and now constitutes a clear and present threat to the safety, wellbeing and welfare of most Nigerians.
To this end, we make these simple demands:
1. We demand for an outright scrapping of the entire SARS unit across the country. Its members have become engrossed in crime, murder, brutality, extortion and disrespect for the rule of law in a manner that makes any attempt at reform a waste of time.
2. We demand for the constitution of a panel by the Police Services Commission to reform the Nigerian Police in its entirety. The agenda must include provisions for better training of police officers; provision of better equipment and firearms; better welfare including housing, insurance, prompt payment of salaries and pensions etc; establishment of a code of conduct and strict compliance thereto as well as strong disciplinary measures for any officer who violates the code of conduct.
3. We also demand for a public hearing at the Senate of the Federal Republic of Nigeria to enable Nigerians table their grievances before our elected representatives as well as the submission of memoranda on reforms of the Nigerian Police including recommendations on the amendment of laws to ensure a more efficient police force.
4. We demand thorough investigations into complaints filed against SARS officers. We demand that such officers be identified and immediately brought to justice. In some cases, we will provide video and pictoral evidence against officers who have been seen to be involved in such acts of brutality and extortion.
We give the authorities 21 days within which to meet these demands failing which we will be compelled to resort to other measures to in ensuring action is taken.
Ourmumudondo group in awka was led by Comrade ndubuisi Anaenugwu