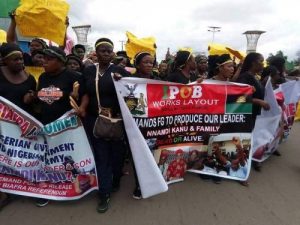 The youth wing of Ohanaeze Ndigbo has condemned the assault on Igbo women who were on peaceful protest in Owerri, Imo State, by security agents, describing it as cruel and barbaric.

The group warned that its members will no longer tolerate a similar situation, in which Igbo land is besieged and stampeded by the army, police and the Department of State Services (DSS), in a bid to arrest and silence Igbo people, who have not committed any crime.

The Deputy National Publicity Secretary, Ohanaeze Ndigbo Youth Wing, Okey Nwachukwu, who addressed newsmen in Umuahia yesterday, said it was against all conventional laws for peaceful protesters to be attacked, humiliated and ruthlessly treated like criminals.

“Igbo youths categorically state that any further attacks on our people will be resisted, and we urge President Muhammadu Buhari to, as a matter of necessity, call security agencies to order,” he said.

The youth group asked security agencies to direct their focus on dealing with the Fulani herdsmen terrorising the country instead of trampling on human rights of Igbo sons and daughters.

In a related development, the Igbo youths also reiterated their stand to resist any attempt to discredit, intimidate or harass the Deputy Senate President, Senator Ike Ekweremadu and other notable Igbo sons and daughters.