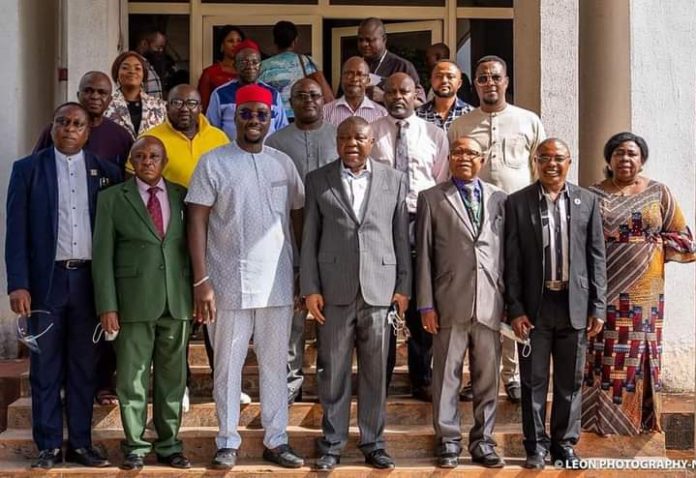 Famous businessman and night clubs owner, Obinna Iyiegbu, popularly know as Obi Cubana has made promise of renovating some dilapidated hostels in the University of Nigeria Nsukka, UNN.

Iyiegbu was a student of UNN which a video of one of it’s hostels went viral, recently, exposing the infrastructural decay in the Nigeria’s first Indigenous university that was built in 1960.

Subsequently, Iyiegbu visited the university where he made pledges to assist his Alma matar.

After the visit, Iyiegbu in his social media handle said: “UNN…..To Restore
The Dignity Of Man! Had a great time yesterday discussing with the Vice Chancellor University Of Nigeria Nsukka, Professor Charles A. Igwe and the entire University management and some Heads of Departments of this great institution on how to give back to the University that helped in moulding me into who i am today.”

The University had through its Public Relations Officer, Chief Okwum Omeaku said that most of the hostels in the institution are currently under renovation, while some have actually been completely renovated.

The University stated that fact of the matter was that most of the hostels were old and worn with age which brought about their dilapidation, but asked parents and students to exercise restraint with the university while it does its best to fix the accommodation challenges in the university.

Omeaku in a statement on Monday said that the attention of the management of the University was drawn to the trending online video and comments regarding the condition of students’ hostels on the campuses.

He however said that the current University administration of the Vice-Chancellor, Prof Charles Arizechukwu Igwe has been making concrete efforts to give the students decent accommodation.

“Renovation of the hostels has already started in phases. Toilet ends of Okpara hall were renovated during the COVID-19 lockdown. Okeke hall has also been renovated and in top form.  Mbanefo hall, the largest male hostel, is currently under renovation.

“To boost the capacity of our students’ accommodation, the administration entered into a BOT (Build, Operate and Transfer) agreement with Viagem Properties Limited to build hostel blocks of over 12000 bed spaces. The project is ongoing and the first phase will be commissioned by 2022.

“The University is at the verge of finalizing an agreement for the reconstruction of Zik’s flats which is expected to add another 6000 bed spaces. We urge our students and parents to be patient with the University administration. We are very committed to addressing the age-long hostel challenge. We also call on our alumni, parents, organizations and good-spirited Nigerians to partner with us to fast track the renovation of the hostels,” Omeaku said.