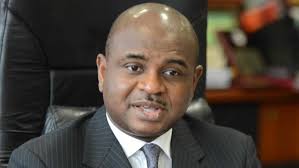 Presidential candidate of Young Progressive Party (YPP) in the 2019 elections, Kingsley Moghalu has blamed northern elites and politicians of encouraging poverty among the masses.

Moghalu made this statement on Sunday while speaking at the Ra’ayi Initiative for Human Development (RIHD) annual lecture, in Kano.

He spoke on “Northern Nigeria’s prosperity in the 21st Century: The imperative of social and economic transformation.”

According to him, the selfishness of the northern political class remains the major cause of poverty and under-development in the region.

He wondered why the North could hold power at the centre for 42 years and still remain “the headquarters of poverty in Nigeria.”

He said solutions for repositioning the North are based on re-setting of the people’s mindset and worldview, insisting that, “the problem with the North is the North versus itself.

Moghalu urged northerners to make human development their priorities, adding that there was a nagging need to fight youth unemployment, drug abuse and upgrade the status of women in the region.

He advised that the almajiri system of education should be supported with Western education, pointing out there need to increase the enrollment of women in schools, “because if you educate a woman, you have educated a village.

“The north must be modern. Nigeria and the northern Nigeria will not make progress until Nigeria is constitutionally re-structured.”

He noted that Nigeria cannot develop on “feeding bottle federalism,” noting what Nigeria needs at this point in time remains true federalism that will encourage fiscal independence of the regions.

He called on northern elite to put heads together in revitalizing Kano’s industrial prowess, as well as making huge investment in mechanized and value-chain agriculture.

Moghalu further charged traditional rulers and religious leaders in the north to play major roles in re-setting the worldview of northerners to tally with development agenda of the 21st century.