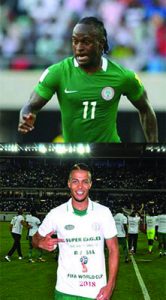 Super Eagles’ duo of Victor Moses and William Troost-Ekong have been nominated alongside 28 others for the   2017 African Footballer of the Year Award .

Moses and Ekong who were instrumental to Nigeria’s qualification of the Russia 2018 FIFA World Cup were among the 30 players shortlisted for Africa’s top individual honor.

Moses, who had a fantastic season last year with Chelsea, helping the London club to the EPL trophy, is among the favourites for the award alongside Liverpool’s duo of Saido Mane and Mohamed Salah.

Another Nigerian, Junior Ajayi who plies his professional trade with Al Ahly of Egypt was among the 30 names selected for the African player of the year based in Africa.

Reigning African Player of the year, Riyad Mahrez of Algeria is conspicuously missing in the 30-man list released by the Confederation of African Football (CAF) yesterday.

Nigerian energy giants, AITEO, are the headline sponsors of next year’s edition that will see players, officials and administrators who distinguished themselves during the year under review being honoured.

The winner will be decided by votes from the Head Coaches/Technical Directors of the National Associations affiliated to CAF, members of the CAF Technical and Development Committee and a panel of Media Experts.

The Awards Gala would be held on Thursday, 4 January 2018 in Accra, Ghana.