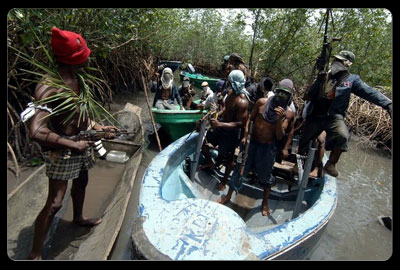 Obasanjo’s condemnation came as Senate President, Ike Ekweremadu, is set to lead a seven- member delegation of the Senate to South Africa over the attacks.

This is even as militants in Niger Delta have  called on the Federal Government to order all South African-owned businesses out of the country within 30 days.

Obasanjo, who blamed the attacks on the insincerity of the government in South Africa, spoke while receiving the leadership of the Nigeria Institute of Policy and Strategic Studies, NIPSS, Kuru, Jos, who paid him a courtesy call at Olusegun Obasanjo Presidential Library in Abeokuta, Ogun State.

He said the current development in South Africa betrayed the contribution of Nigeria to the struggle for the emancipation of the country during the apartheid era.

He blamed the exodus of Nigerians and other African nationals in  search of non-existing greener pasture on their leaders and called on African heads of government to ensure good governance for the overall development of the continent and its teeming population.

Obasanjo blamed South African youths for their immaturity, while hitting their leaders more for allowing fellow Africans to rise against themselves.

Similarly, Deputy Senate President, Ike Ekweremadu, is to lead a seven-member delegation of the Senate to South Africa.

Meanwhile, militants in Niger Delta have  called on the Federal Government to order all South African owned businesses out of the country within 30 days.

In a statement in Port Harcourt, yesterday, the militants, acting under the aegis of Niger Delta Watchdogs, Niger Delta Volunteers and Niger Delta Strike Force, said they would not keep quiet while South Africans continued to kill and maim Nigerians doing business in their country.

Generals John Duku, Ekpo Ekpo and Hart Bradford said if South African investments did not pull out of the country at the end of the 30 days ultimatum, they should be ready for any form of attack.

The militants said: “Failure to close down these companies within one month, we shall mobilize in full force and commence massive attack on South African-owned investments in Nigeria, we shall also make sure that all MTN masts and offices are brought down.”

‘’We want to state that the attack will mark the end of this nonsense because we would not fold our arms and allow this to continue.”

‘’Therefore, we call on the Nigerian government to immediately close down all the business premises owned by South Africans,’’ the militants said.