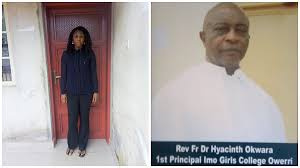 Following allegations by an employee of Diamond Bank, Mrs. Vivian Dimgba, that a Catholic priest and Principal of Imo Girls’ College, Owerri, attempted to assault her over how she dressed, the school management has now denied the woman’s version of the story.

It would be recalled that Dimgba’s story trended on social media and some news blogs over the week when she shared a picture of what she wore during her visit to the school to enquire about admission for her housemaid.

She identified the priest as Rev. Fr. Hyacinth Okwara.

Dimgba wrote on the Facebook wall that as she waited for information on her enquiry, “a priest in an all-white garb walked in. He came to me and said that he thought I was Bob Marley when I was walking in. I smiled, thinking he was trying to either banter or throw me a compliment.

“He now asked ‘Why are you dressed like this?’ I replied and asked him what he meant? I told him that it was a week day and I was working and it was how workers dressed. I was still smiling, trying to humour him and seriously hoping that it was all a joke.

“He said, ‘And why do you have a hair like that?’ I looked at the teachers, all with their weaves hair. I now turned and said, ‘Father, these are braids and I only came here to make inquiries.’

“He said, ‘Oh! You’re laughing! Oya, get up and get out. Go and change. We don’t tolerate hair like these here.’

“Then it dawned on me. I turned to the woman in front of me and I asked her if I was in model government college school? Maybe I was in the wrong place. While I was talking to the teacher, this priest, went in and grabbed a cane and started coming menacingly towards me with it.

“He wanted to start flogging me, screaming that I was indecent and a bad influence on the girls who saw me come in. He had to be held down by four women and man.”

One of our correspondents went in search of the Rev. Fr. Okwara, at the school on Friday but he was unavailable at the time.

However, the vice principal of the school, Mrs. Florence Amahuru, who spoke on his behalf, said that Dimgba’s allegations were “simply mischievous.”

According to her, unlike the attire the woman shared on the social media, she was indecently dressed, which made the priest to reprimand her.

The woman explained that the priest and the members of staff of the school were surprised by what the woman was putting on and told her that such indecent attire was a bad influence on the children, especially girls.

“The principal is a disciplined man. He never assaulted her but reprimanded her for putting on cloths that exposed her body. She was almost naked. The picture she shared on Facebook was not what she wore to the school. The inner wear including her breasts were exposed.

“It was when the argument became heated that he went into her car and wore a jacket to cover her exposed body. Her tummy was completely showing.”

Amahuru said she knew the woman was trouble when she came back to the premises with her husband and started taking pictures of people and shouting.

Dimgba had said in her version of the event, “I don’t know the laws and regulations they have in these schools. But decency I know can be subjective. So, what was the yardstick he used to measure my indecency? He was going to flog me with a cane if not that he was held down.”

She had also indicated that she was suing the priest for abuse of power and threat to do bodily harm.

“He (the priest) comes in the morning and leaves by 10am same morning for the whole day. And he has done that every other day for the past three years,” she said.

But the vice principal of the school said this was another lie.