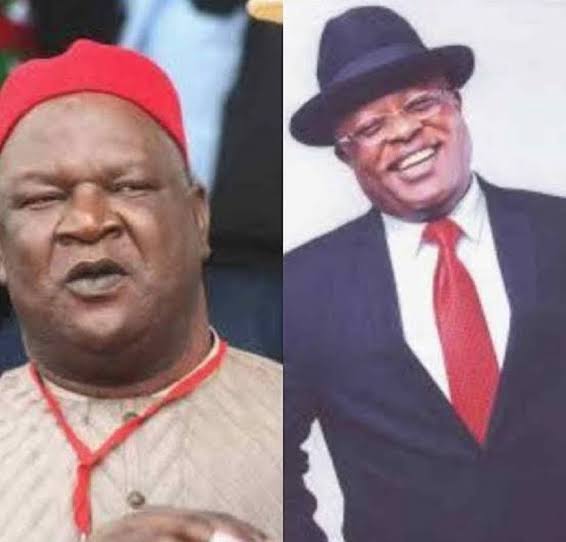 In a widely circulated media briefing on the 27th November after a formal Ebonyi State security council meeting, Governor Umahi stated as follows:

“I want the media to note, that I reported an allegation that some Ebonyi people are engaging cultists and according to them some IPOB Members to start killing and causing crisis in Ebonyi State in the name of fighting Ebonyi State Government and the governor and their leader is Senator Anyim Pius Anyim and their members are Dr. Sam Egwu, Senator Obinna Ogba, Mr. Ali Odefa and others……The same Senator Anyim Pius Anyim fought the former Governor Sam Egwu and many people were killed.

……I have also directed Security Agencies to ensure the implementation of policies on tinted glasses of vehicles in the state, the use of a siren and then their police escort…. If they try to fight the State, this will be their last fight, they will not fight again”.
1. I would not have bothered to respond to this gibberish by a sinking man but for the compelling need to put the records straight and forewarn the public about the sinister plans of a man who personifies everything ignoble, shameless and despicable.
Gov. Umahi is pitiably delusional. He is a prisoner of his greed and inordinate ambition. Here is a drowning man looking for who to drag down with him. Gov. Umahi has made his worst mistake after his latest misadventure by taking on me and other noble and respectable sons of Ebonyi State who have served and continued to serve our dear State with resolute commitment, dedication and integrity.

2. The case at hand is his defection to APC on the 19th of November, 2020. The discerning public knows that he has been on the plan for a long time and when he decided to consummate it, he suddenly concocted an accusation against PDP, that PDP was not willing to zone Presidency to the South East. When he spews these allegations, he would not even mind whether they make sense or not. He did not have the mental capacity to reason that no party in less than two years into a new term would bring the next election unto the front burner. That even in APC where he has gone to, the issue of next election is not yet on the table as doing so would distract the government.

3. People who know Gov. Umahi know that he normally starts this way whenever he is hatching a sinister plan. He raises dusts, makes wild allegations and accusations against people just to divert the attention of the public before he strikes. It is public knowledge that Gov. Umahi had been planning his defection to the All Progressive Congress, APC for a long time. In his delusion, he believed his own lies that he is the only man who matters in Ebonyi State. He did not consult with anybody notable before consummating his defection to APC. After his defection, no person of note followed him.

4. Unable to contain and manage the unsavory reactions from the public he ran to my home in the company of some high-profile people, on the 20th of November 2020, and pleaded with me to defect to APC, saying that if I do, others will follow suit. I pointed out to him that his approach has made it almost impossible for anybody to defect. He pleaded with me that if I cannot defect now, I should not attend any PDP meetings, and I said no, I must attend PDP meetings as long as I am in PDP. He realized that he could not persuade anybody when he saw the crème of Ebonyi Elders and citizen that gathered for the inauguration of PDP Caretaker Committee. He could no longer sleep and declared war on every one who has refused to defect with him.

5. I would not have taken his present spew of baseless allegations seriously, but because I suspect he is under a spell and perhaps something is pursuing him. He may have been told that he will need to kill before he would achieve his present enterprise and so to build up a scenario for him to kill, he will need to spew allegations of killings even when they make no sense. I have no doubt that Governor Umahi may have been told that he needed blood to accomplish his present enterprise, otherwise how can a man in his 6th year as Governor of a State suddenly realise that a former President of the Senate, a former Governor of the State and two-time serving Senator Dr. Sam Egwu, Senator Obinna Ogba, two time serving Senator, are now cultists and IPOB members. Something is wrong somewhere.

Gov. Umahi’s modus operandi are well known and his moves are easily predictable. The three examples below will elucidate this point:

1. The case with Pastor Ephraim Ononye
Pastor Ononye was the pastor to Gov. Umahi’s campaign organization in 2015. Midway into his term, he requested the pastor to start praying for the next term. The pastor declined to be part of his second term agenda. He was so enraged that he walked the pastor out. The following day he accused the pastor of murder and that he was running an illegal school. He unleased security agents against the pastor. The pastor’s school with about 900 pupils was closed till today. On the 2nd of June 2017 while the church was having a night vigil with some widows, he sent security agents to go and close the church. They manhandled and threw the women out into the rain and seven days later, one of the women died. That wicked act has continued to hunt Governor Umahi till date. It is obvious that the spirit of error has come upon him. Gov. Umahi was told that the only way he could win the election was if he ate on the street. Governor Umahi quickly organized a State Banquet on the street at Udensi roundabout and Ebonyi people attended without knowing that it was a ritual dinner. Only Gov. Umahi knows how many Ebonyians that have died mysteriously after that dinner.

Gov. Umahi is the only governor in Nigeria that organizes dinner on the street. Since I got to know the reason behind the street dinner, I stopped attending his functions. After he won the election, he arranged for his close associates to reconcile the pastor and himself. When he was asked why he did not keep his promises, he replied that he was not God that keeps promises.

2. The case of Prof. Bernard Ifeanyi Odoh
Professor Odo was the first of the three SSGs he has had so far. When Prof Odo could not fit into his various schemes, he decided to resign with a widely publicized resignation letter. Governor Umahi was so offended and hit back by setting up a committee to probe the Agric loan disbursement committee which the former SSG chaired. The former SSG responded by writing to EFCC to thoroughly and properly investigate the Agric loan saga as he was ready to provide all information relating to the purported loan transactions. When Governor Umahi realized that the former SSG was not intimated but ready to spill the beans, he backed down and nothing till today is heard of that committee. He had since reached out to the former SSG for a truce but the man rebuffed him. The public should be aware of Gov. Umahi’s use of wild allegation as a weapon. I’m sure if the former SSG had agreed to a peace meeting he would have apologized and if you ask him why do you lie, he will say that he is not God that speaks the truth.

3. The case of Charles Otu
Charles Otu is a journalist in Abakaliki, he wrote an article that was offensive to the Governor. On the 3rd of June 2017 while he was at a newspaper stand, a bus with the inscription “Akubaraohia Youth Vanguard” pull up and at gun point he was dragged into the bus and taken to one corner of Government House, Abakaliki where he received severe beatings until he passed out and they dropped him on the street, up till today, Mr. Otu is yet to regain his full composure. When Gov. Umahi boasted to the two journalists, he accused of offensive articles that “if they think they have the pen that he will show them that he has *KOBOKO”*. Charles Otu’s treatment is what Gov. Umahi meant by KOBOKO. The two journalists, Mr. Chijioke Agwu and Mr. Peter Okutu should thank their God that the public outcry that greeted the Governor’s outburst saved them from the Koboko treatment, who knowns whether they would have come out alive as many never did. But for lack of space, the examples can go on and on.

The purpose of this response is to alert the public and the security agencies in particular on the schemes of Gov. David Umahi so that they will read him upfront and be wary of him and his allegations. Accordingly, all concerned should note as follows:

a. I believe that Gov. Umahi needs help. He was not in this shape when I picked him. His present behaviour is certainly not normal. His behaviour and utterances are strangest whenever he puts on the costume for the new enterprise – an oversized white Agbada and an elongated red hat that over sizes his head. I want to advice his brothers to seek psychiatric and psychological help for him before it is too late.

b. The only offence we committed is that we refused to follow Gov. Umahi in his political adventure. We do not know when belonging to parties of one’s choice has become an offence against a Governor or means fighting a Governor.

c. It is clear that Gov. Umahi may have been told that he needs to kill a high-profile person in order to achieve his mad ambition. Ebonyians should be wise and those he is preparing to use for the killings should know that after using them he will also plan to kill them to cover his track. Examples abound.

d. Security agencies, the Honourable Attorney General of the Federation and Judges should note that Gov. Umahi had boasted as follows:
– That one of the gains of his defection is that he has been promised absolute use of the security agencies for all that he desires to do.

– That the Hon. Attorney General of the Federation is his friend and will soon visit Abakaliki the second time and that he will use him to deal with those opposed to him using the EFCC.
– That he will extensively use the courts to not only make it impossible for PDP to function in the state but also to frustrate those opposed to him including sending them to prison. My advice is that all those concerned should be wary of Gov. Umahi so that he will not taint their soul and ruin their careers, because all his actions and schemes have black sides.

e. To notify the public that I fully understand that what Umahi meant by *“this will be the last fight I will fight”, is that he will kill me so that I will not live to fight again*. While I invite the security agencies to note this plan, I want to assure Gov. Umahi that my blood is not available for him in pursuit of his ambition.

f. To assure the street dinner Governor that no amount of blackmail or intimidation will compel any of us to follow him.
g. Gov. Umahi should know that there is a record of those who died mysteriously, violently, and those who just disappeared since he became governor of Ebonyi State.

On my own part, I will continue to pray for him to recover from his delusion.