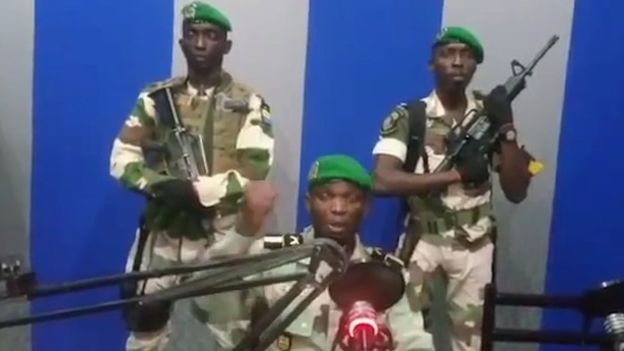 They were shot dead after security officers stormed the national radio building which they had taken over. Three others are under arrest.

The junior officers claimed they seized power “to restore democracy” in oil-rich Gabon, where the ailing leader’s family has ruled for 50 years.

“The situation is under control,” the presidency’s statement said.

Coup leader Lt Kelly Ondo Obiang was on the run for a brief period, before being found hiding under a bed, reports Radio France Internationale (RFI).

“The situation is calm. The gendarmes who are often stationed there have taken control of the entire area around the radio and TV headquarters, so everything is back to normal”, said Guy-Bertrand Mapangou, a spokesman for the government of the central African country.

Mr Mapangou said that the army generals, civil society and opposition leaders mentioned in the rebels’ statement as potential supporters would be investigated.

What is the opposition’s reaction?

The main opposition group, The Coalition for the New Republic, denied any link with the rebel soldiers.

One of its leading members, Paul-Marie Gondjout, told the BBC that soldiers and the police were searching vehicles on main roads in the capital, Libreville.

“We see order, but we don’t know what is going on,” Mr Gondjout said.

He added that with President Ali Bongo out of the country since October when he suffered a stroke, his deputy should be sworn in as head of state.

“The country needs to be run and we have no government, no head of state,” Mr Gongjout said.

President Bongo succeeded his father Omar Bongo as president in 2009. He narrowly won re-election in 2016 in a poll marred by violence and accusations of fraud.

How did the coup attempt unfold?

Some youth in the nearby Cocotiers settlement torched a car and set fire to tyres, while the security forces fired tear gas to disperse them.

Much of the city was deserted with businesses closed and local and foreign companies telling their workers to stay home. Internet access was also briefly disrupted.

The rebel soldiers entered the radio station after “neutralising” gendarmes in front of the building before making their broadcast, news agency AFP reports, quoting a statement from the presidency.

The security services later stormed the building and shot dead two rebel soldiers and freed journalists who were being held hostage, the report says.

Authorities had earlier said five rebels had entered the building and four had been arrested. A later statement said six rebels were involved while other reports put the number at seven.

How can you tell a coup is happening?

In a video circulating on social media, three young soldiers can be seen in a radio studio wearing military fatigues and holding guns.

Lt Obiang, who said he represented a group called the Patriotic Movement of the Defence and Security Forces of Gabon, specifically appealed to young people to “take charge of their destiny”.

The insurgents called on soldiers to take control of the transport system, ammunition reserves and airports “in the interests of the nation”.

BBC Afrique’s Firmain Eric Mbadinga says the coup attempt came as a huge surprise. The army has always been seen as loyal to the Bongo family, he says, because it is dominated by the presidential guard, who mostly come from Mr Bongo’s home region.

The French government and the African Union condemned the attempted coup.