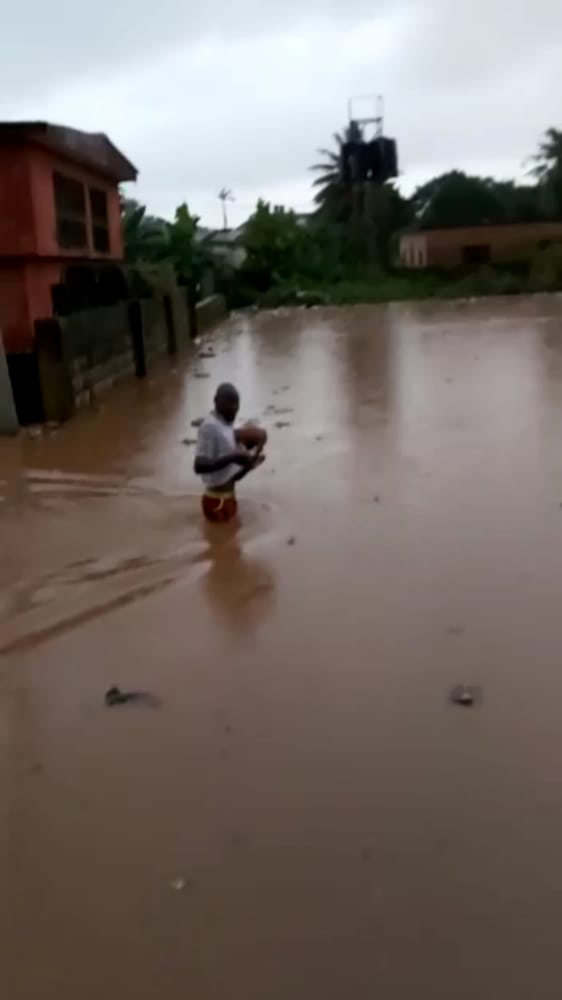 Heavy flooding have completely taken over the whole area in the wake of the peak of the rains, following a faulty drainage project carried out by Hartland Construction Company, in a World Bank project, under the NEWMAP project.

A visit to the area in Benin revealed an area completely submerged under rain, and residents having to wade through the flooding in order to reach their homes or come out.

A resident of the area, Dr Mrs Ojeme, who made a video during a small rainfall, Hartland Construction Company had channeled all the drainages around the area into their streets, and all the water that collects turn the area into a giant pond.

She said the project has greatly endangered the residents “This is our experience in this area. They brought their drainage from far away, to channel water coming from many streets to us. This is a small rain, rain that fell for two hours, but very light rail, and yet, we are swallowed up everywhere. We are swallowed up with water.

“With their drainage system not even covered, and that puts residents in this area more at risk, because any person can fall into their drainage with this flood that has covered everywhere.

“This is what NEWMAP has directed Hartland to do to us. They have left us worse than we were before. It would have been better they never made any attempt to come to this neighborhood. This is what we are experiencing – threat to property, threat to life, opening up a drainage system against residents and channeling water from far away into our homes.

She explained that although the area is prone to flood, the construction work has aggravated the challenge:

They have left us worse than we were before now. They fixed drainage systems to channel water from the adjoining streets – Akhionbare, Oni, Jemide, Giwa Amu to Ainabe, closed a permanent pond to receive the channeled water, turning the whole area into an ocean.

“Ainabe is the most hit because it’s the lowest level as well a close.

In June 2020, some residents had carried out a protest against NEWMAP and Hartland. Having seen the unprofessional work they were doing, the residents had envisaged that the project would endanger their lives and gone for the protest. They had also protested NEWMAP’s refusal to pay them an agreed compensation from World Bank in order to carry out the project.

They chanted ‘No more work, enough is enough. Dr Tom Obaseki should come out and tell us what is happening. We need our money. We needs our money. Stop the deceit’.

A resident who spoke at the protest told newsmen “This place, they begged us to allow them to work, and we allowed them, for two years. They came and destroyed everywhere, and keep telling us they are going to pay. The man took money and collected a huge interest, to the detriment of the citizens. So we are here today with the Enogies, with the people and we are saying that the work will not continue. If they want to continue the work, then let them try us today.

Another resident, Pastor Osaze Omoruyi said “This protest has no political undertone. The rains are here again. It is very important for the world to hear this, that for the past three years, we have attended a series of meetings, to the extent that some persons who started these meetings with us are dead. I can name three persons that are dead and no more with us today. Dr Tom Obaseki came to meet us the last time, promising heaven and earth. But it is also important to let the world know that we know how Workd Bank operates. World Bank will not tear down people’s property without first paying. World Bank will not take over people’s lands without first paying. So we wnat answers from Dr Tom Obaseki. We no longer know what is happening, we no longer know what is going on.

That is why we have come out today en masse to ask Dr Tom Obaseki, the project coordinator of NEWMAP what is really going on, and to pay the persons and communities that are affected. Lands have been taken, and peoples properties have been demolished.

We are not in a banana republic, it is very important for us to also state that we are not here representing any political interests. So we wnat answers, we want accountability, we way transparency.

We have been on this issue long enough. We have begged, we have pleaded, we have explored every reasonable avenue, to demand for what us rightfully ours. In October 2019, he came and said please we should allow him to work. Beginning from Pond 6, they began to destroy properties, go to Pond 5 and 6, they have destroyed so much properties. They are now in Pond 4, moving to other ponds. In one particular instance, one of the property owners that resisted was reported to Government House.

A resident, who spoke to our news men from Canada, Chief Patrick Eholor called on Governor Godwin Obaseki to pay some attention on the problem the residents are facing.

“We should leave politics aside as government should she sympathy and empathy. The Governor should visit the people and see the reality on ground. There is hunger, there is sickness, there is distress. What the residents are passing through is causing all kinds of diseases that we can prevent.

“Those who are watching today are in comfort, but it can also happen to them tomorrow. I am in Canada, it does not affect me, but they are my people. Politics time is over, let government work for the people.

“The Governor should show his human side. He is too stiff. He is nonchalant, there are children and women who live in that area.”