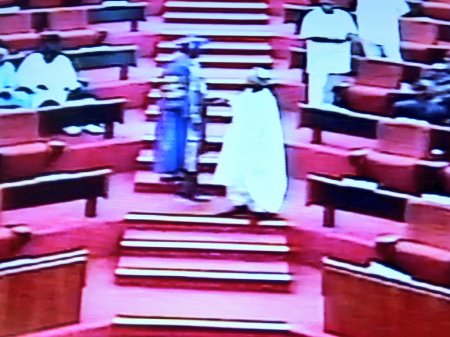 There was drama in the National Assembly, on Tuesday, as controversial Senator, Dino Melaye,  appeared ‎in the Senate, fully dressed in his academic gown.

In a video, Dino was seen dancing and mocking his political enemies using Sahara reporters to bring him down, Dino is stopping at nothing to dramatize the whole thing took the entire Red Chamber of National Assembly by surprise when he stormed into Senate chamber with his academic gown.

Melaye, who shocked lawmakers and appeared while others were already seated, did not retire to his seat immediately.

Instead, he took a long walk around, exchanging pleasantries with his colleagues, who were thrown into laughter. It took the intervention of the Senate Chief Whip, Senator Olusola Adeyeye to restore sanity to the floor.

Video: We Will Take Over The Entire South East Politically and Economically – Asuzu