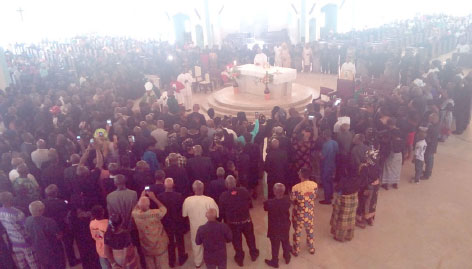 The suspected killers of Rev Fr Cyriacus Onunkwo of the Orlu Catholic diocese in Imo State were on Thursday paraded before newsmen by the state commissioner of police, Chris Ezike.

The prime suspect is a 32-year-old ex-corporal, Jude Madu, who masterminded the abduction of the cleric.

The Rev Fr was kidnapped while returning home from the funeral rites of his father, Celestine Onunkwo.

Others are Izuchukwu Okafor, 28, from Ukwukwa in Azia in Anambra state; Cyril Onyema, 29, from Okwelle in Imo state; Emmanuel Ozuigbo, 29, Ezeagu in Enugu state; Victor Ikechukwu, 33, from Obowo in Imo state; and Ifechukwu Nwosu, 28, a native of Azia in Ihiala Local Government Area.

According to the CP, the operations which led to the arrest of the kidnappers cut across three states of Imo, Anambra and Rivers.

The police boss said the late priest’s telephone and his wrist watch were recovered from two out of the six suspects.

According to the CP, the ex-corporal “was a member of the Armed robbery/kidnapping syndicate and took part in the operation. He holds a National Diploma from Abia State Polytechnic, Aba, and was arrested on September 5, at control post in Owerri in possession of the deceased’s phone. He has confessed to the crime.”