Enugwu-Ukwu,Awka—Several corpses deposited at the Enugwu Ukwu General Hospital Mortuary in Njikoka Local Government Area of Anambra State were, weekend, reduced to ashes following a fire outbreak which source was not immediately known. 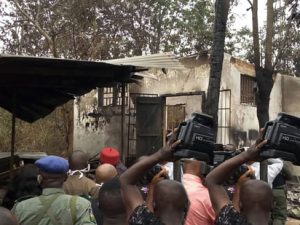 A source said no less than 50 corpses were burnt in the fire, which started from a nearby bush, fanned by the harmattan wind. The mortuary which is located few metres from other buildings in the hospital, was the only building affected by the inferno. Governor Obiano says that State government will set up a panel to look into the remote and immediate causes of the fire outbreak at the Enugwu-Ukwu General Hospital Mortuary, Enugwu-Ukwu in Njikoka Council Area.

Describing it as double tragedy, the Governor commiserated with those affected and pledged to immediately commence reconstruction of the burnt building. He urged them to exercise patience with the mortuary attendants. Many people who kept their dead relatives in the mortuary rushed to the scene yesterday on learning of the incident and were seen sobbing uncontrollably as they were unable to identify corpses they deposited. Among the burnt corpses was said to be that of a prominent man in the area who died in the USA, and was brought home for burial in January 2019, while his relations were renovating his house in readiness for the burial.

President-General of Enugwu Ukwu Development Union, Bonny Nkwoagu said last night that although efforts were made to put out the fire when it started, the harmattan made it difficult. He said although fire fighters came, they ran out of water and it was when they went to fetch water that the mortuary got burnt. According to him, the villagers mobilised and brought water that assisted to quench the fire eventually and prevented it from spreading to other buildings.