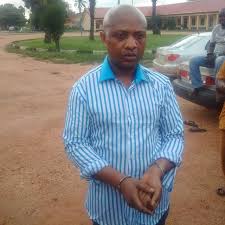 Olukoya Ogungbeje, lawyer to the notorious billionaire kidnapper, Chukwudumeme Onwuamadike, popularly known as Evans,  has alleged that his client  was forced to plead guilty to the charge preferred against him and others by the Lagos State Government.

Ogungbeje averred that he was never allowed to have consultations with him until yesterday when he was brought to court.

The lawyer disclosed this in a press statement issued and signed by him.