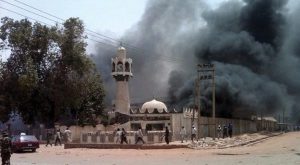 Dozens of people were killed and 56 injured in two suicide bomb blasts in the city of Mubi, Adamawa State, the principal medical officer, Mubi General Hospital, Dr. Edgar Sakawa, has confirmed. A source at the hospital said 37 dead bodies were brought in at the time of filing this report.

A dependable police source who spoke on the condition of annomity as he was not authorised to speak with the press told Daily Sun that over 70 people lost their lives in the twin bomb blasts. Residents who attended the funeral of the victims also said that over 70 graves were dug.

Commissioner of Police in the state, Abdullahi Yerima, had earlier told Daily Sun that scores of people were feared dead and over 20 were critically injured in the suicide bomb blasts in Mubi main market.
The commissioner said that the police anti-bomb squad has been deployed to the scene of the incident to manage the situation.

We gathered that the bombs went off at around 1pm yesterday, as Muslim faithful were getting ready for afternoon prayers.
The first blast was reported to have gone off at the market mosque, killing worshippers, while the second bomb was said to have gone off in the second-hand clothing section of the market, approximately 200 kilometres away from the mosque.

Details of the number of casualties remain sketchy but sources from Mubi told Daily Sun that the military has cordoned off the area to prevent further casualties from any possible explosion.

The Adamawa State head of operations, National Emergency Management Agency, Imam Ambani, confirmed the incident but said the agency has deployed personnel to ascertain the situation, as the agency could not confirm the number of deaths yet.