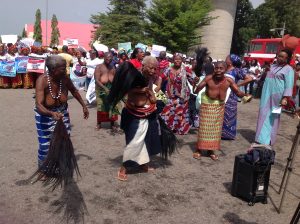 No fewer than 2000 women in Benue State are currently protesting in Makurdi over alleged planned innovation of some Fulani herdsmen into part of the state.

It was gathered that the women’s protest was sequel to the perceived disaffection of the herdsmen over the beginning of the implementation of the anti-open grazing law which kicked off on Wednesday.

The women,  some of who are stripped to their underpants, have marched into the Government House in Makurdi.

Governor Samuel Ortom and his wife, Eunice are currently addressing the protesters.