ENUGU—THERE was anxiety in Enugu yesterday, following the explosion of Improvised Explosive Device, IED, at the country home of the President General of Ohanaeze Ndigbo, Chief John Nnia Nwodo, at Ukehe, in Igbo Etiti Local Government Area of the state. 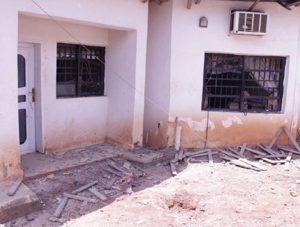 The incident happened at about 5.30 am when members of the household were getting ready for the early morning Sunday mass. A statement by Nwodo’s Media Aide, Emeka Attamah confirmed the bomb attack. Police Spokesman in the state, Superintendent Ebere Amaraizu also confirmed that there was an explosion in Nwodo’s house saying that investigations had started to unravel the reasons and those behind it.

The Indigenous People of Biafra, IPOB, has condemned the attack on Nwodo’ s compound saying it was the handiwork of “terrorists disguised as herdsmen.” Earlier,on Saturday, the IPOB, circulated a message reportedly signed by the Legal Adviser to Ohanaeze Ndigbo, Barr Chuka Momah, raising an alarm, over alleged plans by security agencies to bomb public places including schools and police stations as well as kill innocent citizens in a bid to incriminate IPOB and make it look like a terrorist organisation.

Nwodo’s media aide, Attamah’s statement read in part: “A bomb explosion took place today (yesterday) Sunday, April 29, 2018, in the country home of the President General, Ohanaeze Ndigbo, Chief Nnia Nwodo. A cursory look by the Police Bomb Disposal Unit suggested it was an Improvised Explosive Device, IED, that was hurled over the fence into the compound causing damage to the windows, the ceiling of one of the houses in the compound and an air-conditioning units. “The Enugu State Commissioner of Police, Danmallam Mohammed, accompanied by the Area Commander for Nsukka Police Command and the Divisional Police Officer for Igbo Etiti LGA, were there to inspect the scene of the bomb blast, which created a crater in the compound. “The Commissioner ordered that security be beefed up in and around Chief Nwodo’s compound and promised that the perpetrators would soon be identified and brought to justice.

“Earlier, the Commander of the Bomb Disposal Unit, DSP John Aniche, had briefed both the Commissioner and Chief Nwodo on the items they collected from the scene including batteries, pellets and other materials used in preparing the IED and said that they would be carefully scrutinised and analysed. “Welcoming the Commissioner to his home, Chief Nwodo expressed surprise that anybody would be after his life but added that the incident would not deter him from leading his people. “He thanked the Commissioner for his prompt response to the incident.

The Deputy President of the Senate, Senator Ike Ekweremadu, has condemned in strong terms, the bombing of the country home of the President-General of Ohanaeze Ndigbo, Chief John Nnia Nwodo, in Ukehe, Enugu State. He said: “I call on the security agencies to get to the root of this devilish act and ensure that the culprits and masterminds are brought to book immediately.”

Members on solidarity march for Trump Reacting to the explosion in Nwodo’s house later, the IPOB said that those seeking to implicate IPOB will end up implicating themselves. The organisation in its statement signed by the Media and Publicity Secretary, Comrade Emma Powerful said: “The organisers of this terror campaign intend to divert attention from the massive embarrassment and public humiliation that awaits ‘Buhari’ in Washington DC courtesy of IPOB in the USA. “They may have wrongly calculated that embarking on mass murder and destruction is the only way to convince the US authorities that IPOB is a terrorist organisation deserving of proscription and extra judicial executions.” Whatever the motives of these terrorists, they have failed woefully. Our modus operandi remains the same – a sustained campaign of civil disobedience, targeted global campaigns, protests, boycotts and rallies.”