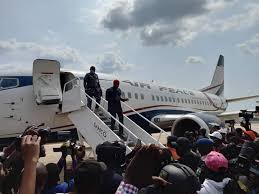 It was like a dream come true! Few months ago when Gov Willy Obiano promised Ndi Anambra that he would deliver a brand new international airport ,many did not take him serious ,thinking that it would go the way of our politicins.

The doubting Thomases argued that Anambra monthly allocation has nose-dived together with the state mounting debt position  as well as numerous financial obligations begging for urgent attention .COVID-19 challenges throughout last year would have given Gov Obiano enough reason to suspend the airport project but determine to deliver as promised ,the International Cargo Airport comes alive today with the arrival of two Air Peace aircrafts as test commercial flights. It was historical. Many people from all parts of the State graced the airport arena to witness the first ever aircraft that landed in the soil of Anambra since after the civil war – viz the historical Oba Airport.

BVI Channel 1 crew led by Chinedu Asuzu and Ndubuisi Anaenugwu was in the airport to join well meaning Anambrians in celebrating Gov Obiano for delivering an international airport within a record time of 15 months.