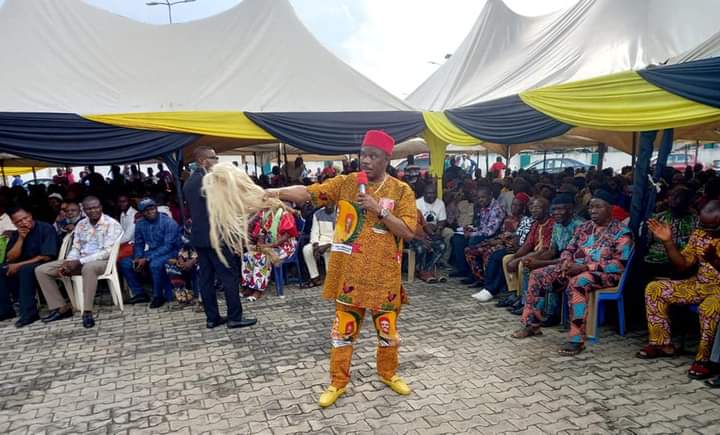 The All Progressives Grand Alliance (APGA) Ward and Local Government Executives, in all the 21 LGAs and 326 wards across Anambra State have been charged to deliver their respective wards in the forthcoming governorship election in the state

The APGA gubernatorial candidate, Prof Chukwuma Charles Soludo made this appeal at the Governor’s Lodge, Amawbia, at a strategic meeting with Governor Willie Obiano, the Party Leader and Governor of Anambra State and the party faithfuls

Cee Cee Soludo used the occasion to further speak about his manifesto and urged the party wards and LG executives to effectively mobilise the people to vote massively on November 6, for the party

He reiterated that elections are won both at the polling booths and wards respectively, adding that it is where greater efforts should be concentrated in mobilizing the people for a successful outing come November 6, 2021

Governor Willie Obiano also used the occasion to appreciate the party faithfuls for their support for his administration over the years and urged them to sustain the tradition by mobilizing the people to vote massively for the party in the forthcoming gubernatorial election. He reiterated again that Soludo is the best candidate for the election whom all Ndi Anambra should fully support

The Governor’s wife, Mrs (Dr) Ebelechukwu Obiano urged the party members to rally round and vote massively for Prof Chukwuma Charles Soludo, the party’s governorship candidate, who she said, will consolidate on the achievements of her husband.

Other top party stakeholders who also spoke at the strategic meeting, include: Hon. Chinedu Obidigwe, Senator Victor Umeh, both urging the party members to brace up and ensure total victory for APGA and Soludo/Ibezim come November 6, 2021