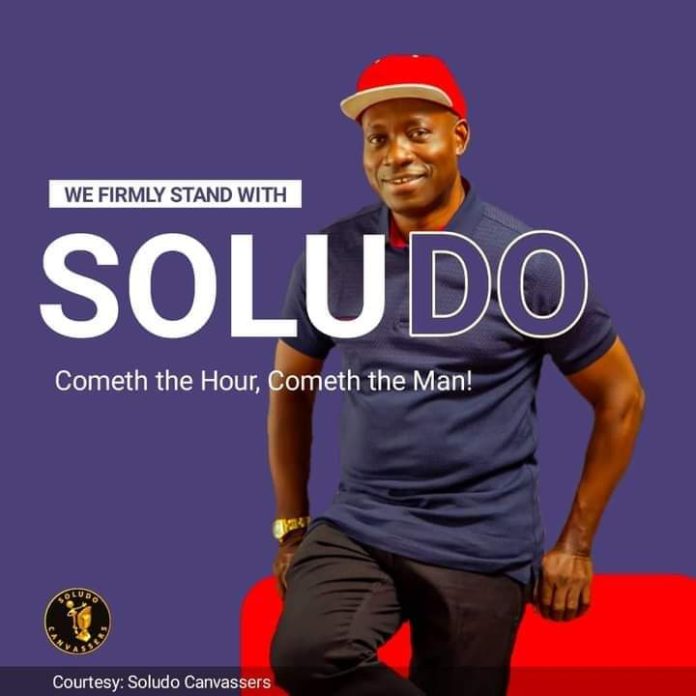 Charly nwa-mgbafor as he is fondly called by his peers at Isuofia in Aguata local government area of Anambra state was that young lad with a humble beginning in the village. Though born of an illiterate mother, Charly nwa-mgbafor changed the narrative of his life; fetching firewood from the bush, fetching water from the stream, fetching feeds for goats, setting traps for bush rodents and running other errands on bare foot. Soludo never had the premonitions that he would traverse the continents of the world in his early 30s despite not being born with a silver spoon in his mouth. As the Igbo adage says a chick that will grow into a cock will be spotted the very day it is hatched was the story of Professor Chukwuma Charles Soludo who is currently on the verge of becoming the next governor of Anambra state.

At St. Martin Catholic Church field Odata Ihiala where he told APGA faithful of his humble beginning from the village, Prof. Soludo said his late mother’s dream was for him to be like one Ugoji a village headmaster even though his mother never saw the four walls of a classroom in her lifetime. In spite of his late mother’s apparent deficiency in reading and writing, she would always enquire about his performance at school after returning from the village market. Soludo in an emotion-ladened voice recalled how he realised many years after his mother’s demise that the woman didn’t go to school but loved education and ensured he had a solid foundation. That was how Charly Nwa-mgbafor, the village boy from Isuofia Aguata local government area of Anambra rose from grass and has continued to enjoy the grace of God in his life.

At Uga Boys Secondary School, young Soludo exhibited exceptional brilliance. He was the cynosure of all eyes and thus became the senior prefect. Unlike some of his peers who had the luxury of being brought to school in a vehicle, Soludo trekked to school in the rain and in the sun but remained intrepid in the pursuance of his ambition. His mother would say, “My son do not despair. I know you will make me proud someday. How was school today? Welcome back my son. Eat your food. Then go and fetch firewood for me. May the gods of our ancestors guide and protect you for me.” Those were his mother’s best wishes for him when he was still a little boy in the village. Though Soludo’s mother did not live enough to behold the transformation of her son from a mere village lad to an internationally recognised figure but like the saying goes no one wrestles with his god; hence little Soludo found solace in the legacies his mother left behind.
In spite of the vicissitudes of life, Soludo moved on to the University of Nigeria Nsukka where he became the most outstanding graduating student of his era with a First Class Honours in Economics. That was how the village boy from Isuofia broke the jinx of poverty and abject penury and continued to fly high in the sky like the Eagle. The same University of Nigeria Nsukka was where he obtained his Doctorate Degree and thereafter became a renowned Professor of Economics from whence he became a shrine nations of the world consulted for divinations. The story of Prof. Chukwuma Charles Soludo’s miraculous escape from the countryside to the rest of the world is a vivid portrayal of the saying that all hope is not lost if one remained resolute, steadfast and determined to face life squarely irrespective of outcomes.

His mother’s legacy indeed was his pathfinder because she wished her son would take after Ugoji the village headmaster. That wish came to pass many years after she joined her ancestors and her son Prof. Chukwuma Charles Soludo not only surpassed Ugoji the village headmaster but also became the Governor of the Central Bank of Nigeria as well as an economic adviser to many countries of the world. Today, that village boy from Isuofia is also a member of the economic team of the Federal Government of Nigeria. Indeed, the eye that looks down will surely see the nose and the finger that fits should be used to pick the nose. Prof. Chukwuma Charles Soludo who began his missionary journey from a remote village in Isuofia, has served the world and has decided to return to his home state (Anambra) to do the needful.

Now, the village boy from Isuofia is the candidate of the All Progressives Grand Alliance (APGA) for the November 6 governorship election and has equally chosen a reputable medical expert in the person of Dr. Onyekachukwu Ibezim to be his Deputy. It therefore behoves on Ndi-Anambra to bestow their mandate on Charly Nwa-Mgbafor and his running mate to enable them to consolidate and continue from where Governor Willie Obiano and his Deputy Dr. Nkem Okeke will stop. November 6, 2021 will certainly be a date in the life of Prof. Chukwuma Charles Soludo, a village boy from Isuofia Aguata local government area of Anambra state Nigeria.