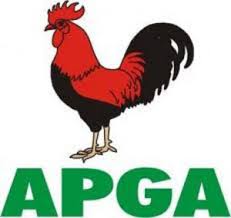 Former Central Bank of Nigeria (CBN) Governor, Prof. Chukwuma Soludo, merely broached the dilemma confronting the All Progressives Grand Alliance (APGA), when he claimed that certain forces do not want him to contest the forthcoming gubernatorial poll.

Checks by The Guardian show that unless providence good fortune smiles at the governing party in Anambra State, it might not feature on the ballot on November 6, 2021 when the governorship election holds.

It was gathered that controversies over the last APGA national convention scheduled for Owerri, Imo State, which produced Chief Edozie Njoku, arose after the former chairman, Victor Oye, contrived another hasty convention in Awka, Anambra State.

After several litigations, the Independent National Electoral Commission (INEC), could not act on the judicial pronouncements in favour of Njoku, following appeal from Oye.

While the parties to the leadership tussle continued nursing hope that things would ultimately go their way, the Anambra State governorship election beckons. And, as preparations for the poll continued, the Judiciary Staff Union of Nigeria (JUSUN) strike supervened, thereby delaying court processes.

The Federal High Court, Abuja is billed to deliver judgment on the contentious issue of who is the authentic national chairman of the party. INEC has always maintained that it would not interfere in party’s affairs, especially in the middle of litigations.

It is, however, not clear whether INEC anticipated the peculiar nature of the current wrangling within APGA, where midway into the process of electing new helmsmen for the party, the former chairman, Oye, decided for a fresh start.

Not that alone, The Guardian gathered that a former governorship candidate of Nigeria Advanced Party (NAP), Mr. Ifeanyi Okonkwo, filed a motion in court seeking to quash the publication of INEC guidelines for the Anambra governorship poll.

INEC Commissioner, Festus Okoye, told The Guardian that he was not in a position to comment of the status of litigations against the commission, stressing that, “sometimes, court papers are served on the commission in the headquarters, sometimes through the state offices.”

Okoye noted that when INEC is served through the state offices of the commission, “it may take us a day or two to be aware of it and it goes directly to the director of legal services then to the chairman before it comes to the commission. I cannot confirm as at today whether there is a litigation relating to Anambra gubernatorial poll or not.”

But speaking on his suit, Okonkwo said INEC was served at the headquarters after the commission frowned against service of writs at state offices. He regretted that but for the JUSUN strike, the matter ‘Obi versus INEC’ would have been heard on April 28, 2021.

On the APGA crisis, the INEC commissioner disclosed that commission has its own processes and proceedings, adding that, “ordinarily, before there is a change of leadership in any of the political parties, the commission must be invited to come and monitor either the congress or convention.

“The moment new officers are elected, their names and signatures are filled with INEC. And so, unless we resume work on Monday, I will not be in a position to give you a clear position on the name of the person who is on the file as the chairman of the party.”

Okoye expressed the hope that when APGA holds its governorship primary, “it is the chairman and secretary recognised by the commission that we are going to give the access code to and they are the ones to file the names and particulars of the nominated candidates.”

As things stand, nobody knows when the JUSUN strike would be called off, especially given that after one month of the standoff, ego has crept in and it does not seem that any of the feuding parties is prepared to blink first.

While the situation remains dicey, APGA National Working Committee (NWC) led by Njoku held a meeting at Sheraton Hotel, Abuja with a view to plugging all loopholes to ensure that it features on the ballot contrary to the machinations of the party’s detractors.

Although Oye and his group did not attend the NWC meeting, it released statement through Sly Ezeokenwa, distancing itself from the Njoku led executive.

After the NWC meeting, it was obvious that the APGA leadership under Njoku was determined to make hay while it was still day. The NWC said it met as part of its statutory duties and in fulfillment of the party’s internal workings and to strengthen APGA’s internal democracy.

The part said it reexamined, reassessed and reevaluated the party’s ideology, focus and political capital and the state of the party and resolved that harmonising the various interests of stakeholders will ensure APGA’s victory in the November 6 Anambra governorship election.

“To achieve this, the NWC proposed the constitution of a 5 man Committee and to ensure that the forthcoming APGA governorship primaries on June 25, 2021 is seen as free, fair and credible,” the NWC resolved.

Other resolutions reached at the NWC include the decision to consider the proposal for extension of sale of expression of interest and nomination forms for the governorship. “This,” the party stated, “is to accommodate requests from party members that have shown interest to purchase the forms from the Njoku leadership.

“The NWC looked at various applications from new entrants into the party that whish to contest the election. As the NWC, we feel that politics being a group activity, people should be given a level play ground to prove their mettle and bring new vibes into our great party.”

The NWC further resolved that although the Anambra governorship election remains at the front burner, its preoccupation is to reposition APGA for greater potentials in 2023.

But peeved by the huge mileage and goodwill being garnered by Njoku, Oye, through the party’s Legal Adviser, Ezeokenwa, said APGA remains indivisible under him.

In a statement, Ezeokenwa lamented that conclusions drawn by APGA Eminent Group, were meant to cast aspersion on Oye’s leadership, lamenting that the action of the group must be the latest in a series of attacks against APGA by Chief Edozie Njoku.

Recalling how Njoku also featured in a phone in programme of African Independent Television (AIT), Ezeokenwa regretted that the station granted Njoku “a cameo appearance, where he made a barrage of mischievous claims, ostensibly in a bid to accentuate his claim to the exalted position of the National Chairman of APGA.”

Ezeokenwa said one of the most hideous claims by Njoku was that he is a founding member of APGA, alleging that Njoku is not a member of APGA and cannot claim any right, benefit or position in APGA. While contending that APGA constitution does not guarantee or enthrone perpetual membership, Ezeokenwa said Chief Njoku has been in and out of the party in a number of occasions.

Ezeokenwa stated: “It is a known fact and as decided by various courts that it is only a political party that knows and determines, who its members are. Thus, the claim of being a foundation member of APGA by Chief Edozie Njoku stands logic on its head.

READ ALSO Why African countries are closing their borders
“Several foundation members of APGA have left the party to seek political fortunes elsewhere. Indeed, no less a person than the pioneer National Chairman of APGA has left the party. What makes Chief Njoku’s case different?”

The Legal Adviser disclosed that only the national chairman of a party could appoint members of the Convention Planning Committee, but failed to controvert Njoku’s claim that the Oye did not reserve the right to disrupt the process midway to serve his narrow purpose.

Again, going by the allegation that the use of party delegates to run a fresh convention after their tenure expired rendered the convention null and void, shows that the courts have issues to settle for APGA.

Yet, while Njoku and Oye are wrestling over the last APGA convention, attempts by some stakeholders to choose Soludo as consensus candidate is causing furor in the party.

Erstwhile national chairman of the party, Sir Victor Umeh, had, in a news interview described Soludo as the only aspirant that could win the governorship for APGA.

But, no sooner had Umeh made the assertions than other aspirants, including Hon. Chukwuma Umeoji and Nze Akachukwu Nwankpo, cried foul, alleging that Umeh wanted to atone for his clever tricks against the former CBN governor in 2013.

Ever since he announced his interest to contest the APGA ticket, Umeoji was seen as a ‘lion killer,’ even as some stakeholders accuse him of being sponsored to spoil the chances of the former CBN governor. Despite insinuations and innuendos, Umeoji has continued to wave his grassroots appeal, which gifted him a second term at the House of Representatives.

While Soludo hails from Isuofia, Umeoji is from Ezinifite in the same Aguata Local Council of the state. Despite the fact of their Aguata roots, which some stakeholders tried to use to blackmail him out of the race, Umeoji declared that only APGA delegates should select the party’s standard bearer and not self-serving expired wannabe political godfathers.

Whether APGA would pick its candidate through consensus or harmonisation, the crucial huddle for the party featuring in the November 6, poll could be the outcome of the Njoku versus Oye contention in court.