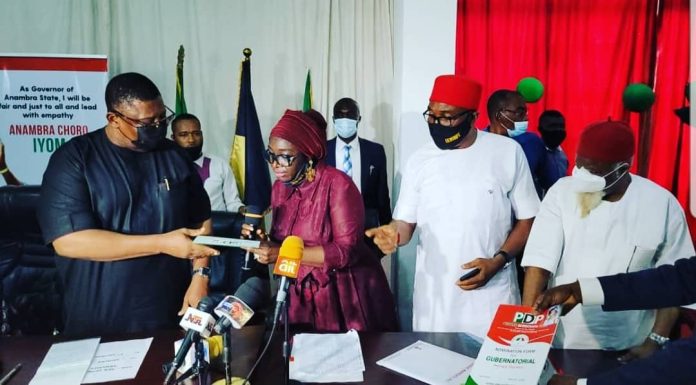 On Tuesday, March 23, 2021, shortly after the submission of her governorship nomination forms at the party National secretariat Abuja, Senator Uche Ekwunife became -both the only female and first aspirant to submit her nomination forms- ahead of the very important Peoples Democratic Party primary election, come June.— unreservedly the Senator is well prepared, experienced and competent to pilot the affairs of the state.

Curiously, like myself, many had their eyes fixed to drink from the deep well of experience, or put differently hear from Ekwunife during the press briefing, and I was not surprised she did not disappoint the overflowed audience. Her intellectual fecundity, grit, performance in politics and if I’m not missing anything, vision will always take the centre stage whenever such situation presents itself. If truth be told, Ekwunife should be a governor Ndi Anambra should afford not to miss.

“I am running for gubernatorial election because I want to move Anambra state forward”, said Ekwunife. No doubt, what she has demonstrated till date in politics from the moment she was first elected as a lawmaker in 2007 gives credence to the statement. ..No better way to scrutinise an elected officer, than to look at their achievements. Testimonies abound that Ekwunife has been the best lawmaker from East of the Niger with unprecedented achievements.— it shows that gender is not a limitation.

Let me at this juncture, officially congratulate the woman we like to call Iyom for her genuine interest to drive the economic development of the state following her submission of governorship nomination forms. The Igbo-Ukwu born senator’s aspiration is for good governance, sustainable development and prosperous Anambra.

In my personal capacity I conducted a survey and the result shows that with Ekwunife on the PDP ticket women will be more motivated to cast their ballots this year. They are very reliable, consistent and a very powerful voting bloc. They have a lengthy history of organising their union, house, sorority, church et al. And for the fact that Ekwunife has appealed to their progressive sensibilities should indeed worry whoever that is running against her.

The enthusiasm following Ekwunife’s declaration has not been seen since the creation of the state. There’s a clamour for female elected governor in Nigeria, however, in Anambra the matter is gaining momentum simply for what the only female aspirant stands for. This is a woman who has used every opportunity given to her to serve humanity. She has empowered, attracted more projects as well as jobs for people of different demographics more than her contemporaries. Also performing excellently well in her primary responsibilities as a lawmaker.

From Anambra south to central and down to North women play decisive role in elections and there overwhelming acceptance of the aspiration of the Chairman Senate Committee on Science and Technology is a huge boost to the quest for a first female elected governor. And like Ekwunife remarked, public confidence, antecedents, gender and other variables formed part of her winning strategy to return PDP to Agu Awka.

All told, this is a defining moment and it must not be traded with. If the party wants to truly bag the light of the Nation as one of its states knowing that 2023 is almost at hand, the delegates should not fail to nominate Ekwunife because by all standards she stands tall and shoulders high above the rest in the race for the governorship seat of the state.