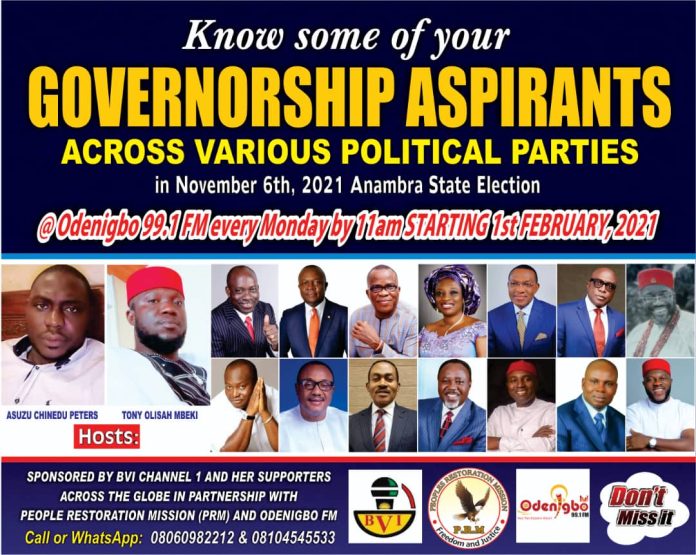 The People Restoration Mission (PRM), a political movement group, said it has launched a radio participatory programme to sensitise and mobilise over a million voters ahead of Anambra state November 6 governorship election.

Mr Ndubuisi Anaenugwu, the Group’s Director of Public and Strategic Communication, who disclosed this in a statement, said the programme would run every Monday on a private radio station in the state as well as on an online based television station.

According to Anaenugwu, PRM, being a mass political movement comprising professionals, would through the media sensitisation programme ,grassroots mobilization and other strategies entrench a Governor that would represent the interest of the Masses not the interest of few political cabals.

”People Restoration Mission(PRM) has started mobilizing voters across the State ahead of the election. This is the first time real Professionals are getting directly involved using their resources to give our people sense of direction in taking political decisions as politics determines everything in life. To mobilize the ordinary people on the street ,the movement has in partnership with BVI Channel 1, an online media, has started a weekly program with Odenigbo FM 99.1 every Monday from 11- 12pm to educate the masses on why they should participate in electoral process and recruit a courageous Leader who can set a new political agenda for a new Anambra for the future generation.

“The movement believes that Anambra state is the light of the nation and must lead in all ramification. The Radio program is also set as the peoples Parliament where Aspirations will be invited to come and introduce themselves to the people- know your aspirants. The Aspirants will be rated on the basis of a well defined parameters and a social contract will be signed with the candidate that will secure the Movement support. This process is to ensure that the public is part of the recruitment process of their Governor from the party level to General election .Any political party that produces unpopular candidate as a party flag bearer has already lost out! The movement will no longer tolerate a situation where an unknown person serving the interest of moneybags will be smuggled in and packaged by praise singers to be a Governor for more 8 million people. It should be noted that democratic power belongs to the people and we thank God that EndSars Movement has shown the power of the people ; that power will be exercised in the polling stations” he added.

He said that the movement would not favour any Aspirant except the One that will have  popular support of the Masses because of his or her restructuring ,economic ,security,agricultural and industrialization agenda, and urged support to the Movement State Coordinator, Comrade Chukwuemeka Chibuzor(08060982212) or email peoplerestorationmovements@gmail.com to join the process of recruiting the Governor after Gov Obiano.