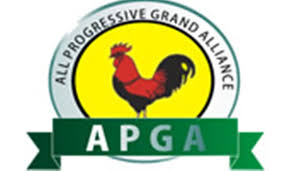 The Supreme Court, on Friday, dismissed the multiple appeals seeking the sacking of Dr. Victor Oye as the National Chairman of the All Progressives Grand Alliance (APGA).
Justice Sidi Bage who delivered the lead judgment of the apex court, dismissed the two appeals filed by a faction of the party led by Chief Martin Agbaso and Mike Alioke against Oye for ‎lacking in merit.
The Supreme Court upheld the judgment of the Enugu Division of the Court of Appeal, which reinstated Dr. Victor Oye as the authentic national chairman of the party.
Other Justices of the Supreme Court on the panel include Justices Bode Rhodes- Vivour; Mary Odili and Inyang Okoro.

The Enugu Division of the Court of Appeal had on August 10, 2017, upturned the judgement of an Enugu State High Court that sacked Victor Oye as the National Chairman of the All Progressive Grand Alliance (APGA).

An Enugu High Court presided over by Justice A.R Ozoemena had ordered the removal of the national chairman of the All Progressives Grand Alliance (APGA), Victor Oye and replaced him with Chief Martin Agbaso.

The action of the High court followed a suit by the Secretary of the party in Enugu State, Comrade Mike Alioke, who challenged the continued occupation of Oye in office after the National Working Committee (NWC) of the party affirmed his suspension on October 5, last year.

But the special Appeal Court panel of three judges’ led by Justice Abdul Aboki, in its judgment, set aside the judgment of the Enugu State High Court.

Justice Aboki‎ declared that Victor Oye’s Appeal succeeded in its merit and declared him as the authentic Chairman of APGA.