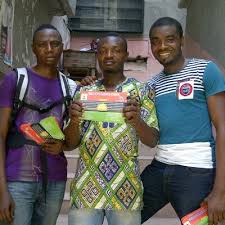 WHY I LOVE MAZI NNAMDI KANU

A cult following that most Politicians can only dream of but can never achieve. There is no doubting the fact that many worship, cherish and treasure the AfaraIbeku born son of a warrant chief. There is no dismissing the truth that many are dying and willing to die in his place.

There is no overlooking the truth that Uchechi Kanu’s hubby is gifted with oratory prowess that is beyond the reach of many. The truth remains this principal owner of Radio Biafra London (RBL) is smart. Very smart! I mean very very smart.

Many of his followers actual believes he is a sort of a saviour, a prophet and a messiah. Some value him more than Jesus Christ the son of God. Some go as far as saying he is the God they can see. Many claimed he cured them of their sicknesses through his miraculous prayers and hailing powers. Many believes he can do no wrong. And quite a good number actual believed he can fly to Abuja and deliver the head of Muhammadu Buhari with his bare hands on a platter of gold as he once vowed.

Secondly, I love the self acclaimed only spotless individual in the whole wide world because he asked us to keep records by simply having our 2 ‘’Ps’’. Yes! You also heard me right. By 2 ‘’Ps’’, I mean our Pen and Paper. Exactly! Mazi Nnamdi Kanu asked us to always bring our Pen and Paper and keep record of his sayings abi na Gospel?

And as obedient followers that we once were, we obeyed. We brought our Pens and Papers and started to keep records of all he had to say and yarn. And he started….

He vowed he will restored Biafra on or before the 31st of December, 2015. We wrote it down! He said he has no intention of seeking Biafra by peaceful means, no intentions at all. That we must go to war to get Biafra. We documented it! He mocked his former boss, thief (in the words of the oratory prowess gifted leader), sorry, Chief Ralph Uwazuruike for his cowardice in chasing Biafra by the illusive peaceful means. And we grabbed it! He promised he will never go on exile. We archived it! He vowed he will never retreat nor surrender. And we jolted it down!

He pledged to always lead from the front. And we minuted it! He ‘’mouthed’’ he will never leave any of his followers and men behind. And we penned it down! He asked us to always remain consistent, courageous and without fear. And we recorded it! He preached against dictatorship, supremacy, supreme leadership and playing God, and even claimed such vices are against the spirit and letter of our republican nature as Biafrans. And we penciled it down!

He declared himself to be whiter than white and whiter than snow. We wrote and vaulted it! He explained how he was above board, from a wealth family and thus illustrated how a poor man can never be a good freedom fighter. We noted it!

He yarned of how we will build Biafra for 75 years non stop day and night. When the nation is restored and how nobody will be looked down based on the account of the profession the person decides to take up. And we munched it!

He spoke of how it was bad, very bad for one to accept payment for working for our nation, Biafra. We diaried it!

He urged our people in the security forces of the #Zoo to resign their paid employment and join moving train. And we marked it!

He parroted, prayed and invited Chukwu Okike Abiama to destroy his generations, kill his parents and murder every member of his household any day he goes against his promises abi na decrees?. And we AMENED that special prayer!

He claimed he was sent by God (Chukwu Okike Abiama) to restore Biafra. But since we are ordinary men, there was no God to ask if it was true. But we kept faith!

He vowed that Transparency, Accountability and Probity (TAP), will be our watchwords in this struggle as we weren’t #Zoo people that lacked such virtues. And we memorized it!

He said he was righteous, sinless and above lying. And we eyed him!

He promised there are only 2 places for him in this agitation: Its either Biafra comes through his making or his corpse will be lowered 6ft below the ground. He claimed any one that falls in the struggle, will have all those they left behind taken care of. He vowed never to be seen in the house of any #Zoo Politician.

He claimed he worships the only true living God and have absolutely nothing to do with idols. He told us that the only thing that makes us human is the ability to reason, ask questions and thus encouraged us to always ask the tough and probing questions.

He claimed our creed is Biafra or death as there was no going back or retreating. He mouthed that we must always speak the truth even if it leads to our death. We spoke of how the President and leaders in Biafra can be questioned even on the streets by ordinary citizens and there will be no repercussions.

He did not stop there oh….

He went as far as advising the Biafran closest to him to kill him any day he is seen with #Zoo Politicians (especially politicians likes Orji Uzor Kalu, Rochas Okoroawusa, FFK etc). Or any day he comes back and tells us that we can now befriend the Yorubas. He claimed that doing such is a sign that he has compromised and that it will be foolish and stupid on our part if we allowed him to live or be alive after such obvious signs of compromise and betrayal.

Everything has changed! The Afaraukwu Ibeku “strong man” does not even hid his “compromisization” again.

But like Nwa Nkita that is destined for destruction, he has not only gone back to his vomits, but he has also refused to hear the whistle of his owner and other thousands of Biafrans (if not millions) asking him to amend his ways and turn a new leaf.

Wait! By the way, what does he take us for? Kids? Does he think we are kids? Did he think the Pen and the Paper he once asked us to bring was for fancy? Is he unaware that Pen and Papers can be used for saving datas and evidences? Is he unaware that evidences of his betrayal abound? Evidences of his compromise nko? Of his 360 U-turn nko? What necessitated and prompted his poorly crafted Signed, Sealed and Delivered menace nko?

What of his hobnobbing with several #Zoo Politicians, sorry conscientious (his new found deceptive word) Politicians.

Well! We are aware he can twist what we documented, wrote down, archived, munched, penned down, penciled and even vaulted by claiming we documented, wrote, archived, munched, penned, penciled and vaulted him out of context (as the smart Londoner that he is). But can he also say the same about his audio and video clips that some of us compiled? Which some are even attached here?

*** Watch Out for the Concluding Part 2