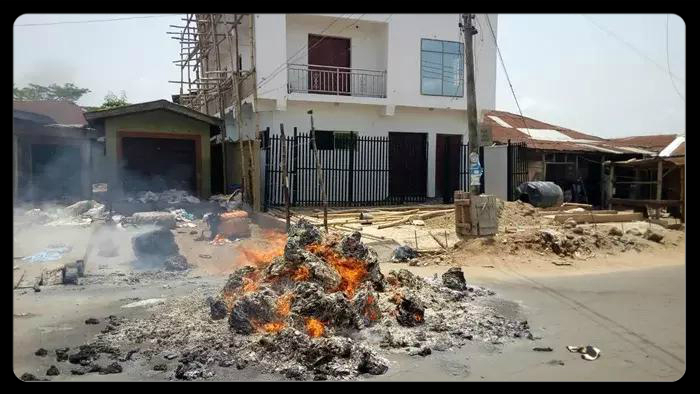 The clash reportedly started when a bus used his side mirror to hit a Hausa woman at sabo last night.

The Magaji of Hausa community in Ile- Ife and secretary to the central mosque in the town, Alhaji Nasir Magaji has explained the cause of the mayhem.

Magaji explained that a Hausa man allegedly slapped a wife of a Yoruba man, Kuburat, who was a pure water vendor.

He said: “It was Kuburat that provoked the Hausa man who slapped him and that after slapping her, many Hausa people were not in his support as they scolded him for doing that, but the Yoruba who were not pleased with the situation, retaliated by beating the Hausa man and others.”

Gunshots are being heard while some shops have been set ablaze and residents have deserted both Sabo and Lagere, Ile-Ife, in bid to escape the clash.

Police and army personnel have been discharged to the area.

The Osun state government has declared a two day curfew in Ile-Ife which will start from 6pm and end by 7am till Friday, March 10.

According to a statement from the Director of Bureau of Communication, Media and Strategy to Governor Rauf Aregbesola, Mr Semiu Okanlawon: “The curfew has been compelled by the breach of the peace in the area which led to avoidable destruction of lives and properties.”

Don’t Come to me For Everything, Tackle Fulani Herdsmen- Buhari to Govs