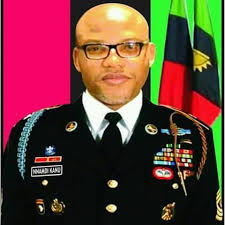 Tension may seems to have doused down in IPOB on the surface but a greater turbulence is still gathering in the inner circle of the rogue movement according to investigation.

Bvi  had earlier reported about a feud between Mefor and Nnamdi Kanu which escalated to a very serious war of words between the duo.

Sources who are very close to IPOB DOS told our correspondent that the report of some online media two weeks ago caused a very severe confusion in the proscribed movement. Kanu and other renegades were forced to invite Mefor for negotiations in order to avoid further hostilities and disgrace in the hierarchy of the movement. After a holistic closed door meeting, Uche-Mefor was advised to pull down some of the controversial post he made on his Facebook page. Though, this was after his conditions were met, a reliable source said.

Nnamdi Kanu, who is running a salary driven freedom fighting movement has been accused of being autocratic, arrogant, fraudulent and crude by some of his comrades who now have a divided loyalty.

Uche-Mefor’s position in the rogue organization was saved after the report of ElombahNews was sited in some reputable forums that have been so critical about IPOB and what they represent. One of our source said, “the one that infuriated Kanu the most was when the report was sited in DPA, Due Process Advocate. It striked so much fear and confusion in Kanu”. Mefor who has been so vociferous over a while called for a change of approach and attitude among the members of the movement but unfortunately, his appeal fell to the wrong ears. Instead of resolving Mefor’s outburst diplomatically, infinitesimal crooks who are more concerned about their stomach in the outlawed organization tagged him a saboteur and called for his immediate expulsion.

Perhaps, understanding the gravity of collateral damage Mefor can inflict on the movement if eventually he is removed arbitrarily, Kanu was forced to bring him to a negotiation table. Alot of compromises were reached in order to assuage and neutralize the looming implosion in the organization. That was why Uche-Mefor subtly deleted one of the post he made describing himself a razor.

Despite the peace deal that was reached, all have suddenly fallen apart as their African representative, George Onyibe who command loyalty and respect in IPOB has been disgracefully sacked from the organization. Kanu after dismissing Onyibe described him as an ‘idiot’ who was given a little opportunity to speak on the microphone but got carried away. Our dependable source also said that George Onyibe is defiantly loyal to Uche-Mefor and not to Kanu.

While George Onyibe in retaliation described Kanu as ‘stupid’ and ‘shameless’ if he should continue to initiate actions that will make IPOB members to die in vain. Onyibe further said, “You are dancing naked in the market place exhibiting your stupidity for all to see. In your mind you think you can destroy me as you have destroyed so many but we shall see to it”.

“You are all yapping now, pray that your fight will not be on the day when you are pregnant”.

“I have told you before you can not disgrace me because there is no shame in the womb that gave birth to me”.

“They threaten me that they will use Nigerian government to destroy me even when they are fighting for Biafra”.

“They told me they will teach me How strong they are by the 7th of September 2020 and I’m waiting for them, this is what they are doing let me help them create popularity for me, in the end I will take them back 40 years behind their career”.

“But the truth is that the battleground will not be of your choosing. So if you think I will respond to you the way you are planning it in order to use my action to justify your fraud then you are hallucinating”.

“Very soon I will broadcast on Radio Biafra extra page or Biafra watchman page you better begin to report it to Facebook now before that time, you are predictable which make it very pathetic”.

“You think you can hide in diaspora and be using our life as sacrifice on ground here?”

Emeka Gift, the former National Coordinator of IPOB in Ivory Coast and purveyor of fake news had in the month of August accused Uche-Mefor and George Onyibe of planning a coup d’etat against the leadership of Nnamdi Kanu.
He also said, Mefor and Onyibe singlehandedly hijacked the structure of IPOB in Africa which has made the proscribed movement to witness multiple cases of insubordination from various quarters. Emeka’s outburst was after Bright Chimezie Ishinwa had earlier asked Mefor to resign for divulging vital information to the perceived enemies of the rogue movement.

A former ally of Kanu said, “Since Nnamdi Kanu sensed the inevitable implosion that is about to crush his family oriented venture (IPOB) into pieces, he has been jumping from pillar to post, appointing crooks and petty hustlers who will be subservient to his command and control balderdash to mount various positions in the movement. It is good to note that many who are working for IPOB presently does so because of the financial and other material gains attached to it. No sincerity of purpose and vision”.

However, investigation shows that IPOB is on the verge of drowning. Many are deserting the rogue movement after discovering how irresponsible and fraudulent the leaders have become, another source said.