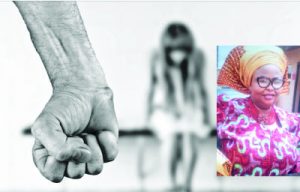 In recent times, there has been an alarming upsurge in the number of rape and other cases of sexual harassment. We have learnt that there was hardly a day that passes without a woman being raped.

For instance, Nigerians are yet to come to terms with what overcame Corporal Barau Garba, the police man who allegedly abducted and repeatedly raped a 14-year-old girl for six days and brutally ruptured the girl’s private part in the process.

According to reports, the minor from Asaba, Delta State, was said to have missed her way while in Onitsha, Anambra State, when she met the policeman whom she allegedly approached for help. She had believed that she was safe with him. But she was wrong.

Barau had allegedly tricked the poor girl whom he took her to his home in the police barracks where he allegedly violated her severally.

Barau, who was believed to be serving at Mopol 7, Sokoto, in Sokoto State, was on a special assignment in Anambra State. But he deviated and found another assignment for himself, thereby dragging the name the force through the mud.

The victim’s family, according to a source, surprisingly begged for pardon for the police man to save his job. But the Anambra State Police Commissioner, Mr. Garba Umar, who confirmed his arrest, had vowed that justice would be allowed to prevail.

Rape, according to Oxford Advanced Learner’s Dictionary, is a conscious process of intimidation, forcing somebody to have sex when they do not want to. The perpetrators usually keep women and children especially, in a state of constant fear.

Rape according to analysts stigmatises the victim’s and devalues them. This often leaves them with a life-long trauma.

Some of accounts of rape can be chilly while some can be disgusting. In the course of rape, some victims lose their lives; some are infected with chronic and incurable diseases.

Some men are mostly the predators; some simply launch out, recklessly hunting for hapless targets in order to satisfy their sexual desires.

Just recently, it emerged that a man in Enugu, Enugu State, raped his three children ages five, seven and nine.  And in Lagos, a 10-year-old girl had cried out, alleging that her father had defiled her for 18 straight months.

At Okuokoko, a town near Orerokpe in Okpe Local Government Area of Delta State, there was also the case of a man, Esiuwu, a suspected rapist, who set his victim’s house on fire after a failed attempt to rape her.

The Commissioner of Police in the state, Mr Zanna Ibrahim, said the suspect was arrested following a complaint by the victim’s elder sister, Joy Godwin.

The suspect allegedly scaled the fence to rape his victim.

“The complainant hit Esiuwu with a wood in the head but the suspect came back to set the house his victim lived in ablaze,” Ibrahim said.

Also very pathetic was the story four men, who allegedly raped an 11-year-old hawker in Ibadan, Oyo State a few months ago. The victim, a secondary school student, who lived in NNPC area of the city, was said to be hawking detergent when the suspects dragged her into an uncompleted building, where they allegedly raped her in turns.

The men had pretended that they wanted to buy the detergent from her; they urged her to come with them to the uncompleted building to collect her money. Two others were waiting there. They took advantage of the helpless girl.

The Oyo State Police Command’s Public Relations Officer (PPRO), Adekunle Ajisebutu, who confirmed the incident said: “The case was reported by the victim’s mother; so the state Commissioner of Police, Mr Samuel Adegbuyi, directed that the case should be transferred to the Criminal Investigation Department of the command.”

A concerned mother, Mrs. Josephine Nkiruka Ebo, who is former President of Inner Wheel Club, Lagos, in an interview with Daily Sun, lamented that rape in the country had become endemic.

She blamed the ugly trend on the spate of moral decadence in the country.

Mrs Ebo blamed the erosion of family values and lack of parental care and control for the rising tendencies, and urged parents to rise and check the trend urgently. She equally identified the prevailing harsh economic realities as contributing to pushing men into taking irrational decisions.

“We should not neglect drugs and alcohol addiction. There is a complete collapse of the impartation of moral values too; the erstwhile culture of communal responsibilities is on the wane.”

She said that the terrible incidence of rape might continue to be on the increase unless the necessary things were done, adding that it was a fight every member of the family and the government must fight.

Ebo said rape was one big crime that ought to be adequately punished, insisting that a rapist was a criminal and should be treated as such.

In the same vein, the Director of Mirabel Sexual Assault Referral Centre, Ikeja, Lagos, Mrs Itoro Eze-Anaba, has disclosed that the centre received sexual assault victims from all ages, regretting that the number of minors now topped the list. She said some of the victims’ ordeals were pathetic, lamenting that most of the perpetrators were either family members or friends.

She was unhappy that Mirabel Centre was not tracking most of the cases in court due to financial constraints but said the centre never deviated in providing timely professional and victim-friendly services to victims of sexual assault, and that was always done in most confidentiality.

Eze-Anaba said: “We have been able to pinpoint that people under the age of 18 are the majority of the victims. Another revelation is that rape is not committed by strangers because over 80 per cent of the victims were raped by people they knew. That contradicts the myth that people are raped because of what they wear or the unusual places they visit.”

On why rape incident was steadily increasing, she decried the high level of impunity among the perpetrators. “Some of our clients revealed to us that the perpetrators boasted that justice would never catch up with them. So, people are getting away with this every day.”

She blamed the low level of prosecution of rapists in court on societal influences, stressing that in most cases, the family members of the victims always withdrew the case at the last minute.

According to her, in some of the cases, there would be pressure on the mother of the victims to withdraw the case, especially when their father was the perpetrator.

But a psychiatrist, Johnson Olumide, said people tended to exhibit irrational behaviour when triggered by other circumstances. He maintained that rape and other sexual assaults were not justifiable. He advised Nigerians to inculcate the habit of routine psychiatric checks.

“Every human has the symptom of mental disorder, but some are more pronounced than others. Mental disorder is not madness as many people usually misconstrue it to be,” he said.

He, however, called on families, institutions, civil society groups, government and the international community to speak with one voice against rape in order to achieve a violence-free society for all.