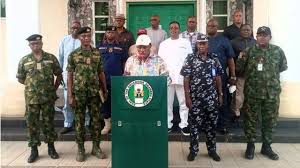 There have been pockets of criminalities in Anambra state in the recent past threatening the status of Anambra as the safest state in Nigeria.

Worried by this unhealthy development, Governor Willie Obiano rose to the situation and summoned all security agencies In the state including local vigilante groups to restrategise to rid the state off hoodlums threatening the tranquility and security the state has enjoyed for so long.

Governor Obiano in a statewide address on the security situation assured the citizenry that he was on top of the situation and that citizens should not despair because perpetrators would be tracked down and brought to justice.

The governor’s address reads, ” So far, Police Officers and Navy personnel on official duties at strategic checkpoints in various locations in the State were sporadically attacked, killed and their firearms taken away. Also, prison and police personnel conveying an inmate to court were equally attacked and killed.

“A Police outpost was attacked unsuccessfully as joint Police, vigilante and Community efforts repelled the attackers. Anambra State Government categorically condemns these attacks on our security personnel and is doing everything possible to apprehend the perpetrators and bring them to justice.

“Since these attacks commenced, I have personally coordinated security Commanders in the State with a joint effort to halt this mayhem and by God’s, we will surely succeed. The State security Council has met.”

“Let me emphatically state that any attacks on security personnel in Anambra is a direct attack on the State itself and will be resisted with our greatest might. Those who attack us are obviously intent on distorting the peace and security we have enjoyed in Anambra State in the past seven years and we will not allow that.”

“We have received massive Police, Army, Navy and DSS deployment and they have joined their teams on ground to enforce security. I have therefore directed all security agencies in the State, the Vigilante Services, all task forces and every structure in the State security infrastructure to rise in defence of our dear state.”

“I call on all youths in Anambra State, all communities, all market task forces and indeed every outfit in this State to duty. All traditional rulers, PGs, community leaders as well as every stakeholder in Anambra to rise to protect our State.”

“As your Governor, I hereby raise the security alert in the State and I commit to restoring order and security immediately. I call on everybody irrespective of affiliations to come together and support Government and security agencies to fight our common enemy. Those who seek to destroy what we have laboured to build must not be tolerated in any manner. I ask the public to help with information and intelligence to the State to nip this situation in the bud.”

“Going forward, extensive security activities will be obvious and by God’s grace we shall overcome. Fitted Tinted glasses on vehicles as well as covered plate numbers will no longer be allowed on all roads within the State. Security agencies will be conducting special and strategic operations aimed at neutralising the emerging threats to our collective safety.

” While I sympathise with the security agencies and families of those killed in these recent attacks, i urge all those involved in ongoing security efforts not to relent. The Police, military and all security agencies and outfits in the State are urged to step out in full boldness to reclaim the public space, dominate the streets, confront criminals when identified and urgently restore order and safety to Anambra State!”

“Ndi Anambra, also saturating the media waves is a horrifying video of the killing and beheading of an alleged cultist by members of a viral cult group. This is most despicable and a terrible act. I wish to inform Anambra citizens and residents in the State that the Police has arrested three principal suspects and on the heels of their accomplices. They shall all face the full wrath of the law.”

“I have ordered a clampdown on all cultists and their activities. This state shall no longer tolerate the violence that erupts now and then in the name of cultism. Those who try our will in this regard will have themselves to blame! I urge all youths in the State to shun cultism and embrace meaningful lifestyles.”

“In the same vein, all kinds of touting in the State in whatever guise especially in Onitsha will no longer be tolerated. Security agencies are hereby directed to arrest anybody hanging on the road with sticks and molesting innocent citizens, drivers etc. The madness must stop.”

“I must also inform the public of the recent kidnap of the President General of Omor Community in Ayamelum local govt area and his murder by the kidnappers. My heart goes out to the family of the late PG and the Omor community in general.”

“When the incident occurred, Government in collaboration with the Police and the community youths made sustained efforts to rescue him alive. Unfortunately, his abductors killed him in the forest and fled. It took efforts by the Police to recover his body after an extensive search exercise.”

“Let me assure all Omor people that the Government and security agencies are doing everything to apprehend the kidnappers with a few arrests made already. Massive security deployment will also be strategically made along the Ayamelum axis to stop further incursions by criminals. I therefore urge you to remain calm as we are handling the situation.”

“Let me restate the call for collective efforts by all Anambra people to defend our State against these recent attacks on security personnel and formations as this is the only solution to forestall criminality. We cannot allow our security achievements and status as the safest state in Nigeria to be compromised at all.

“I urge all Anambra people and residents in the State to come together, support Government and security agencies so that we can fight and win the war.”