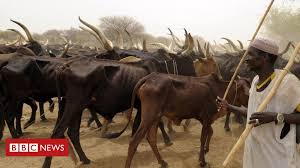 Anambra State Governor, Willie Obiano, has banned the grazing of animals on the premises all schools in the state.

He ordered that any herdsman found violating his ban order should be arrested.

Obiano gave the order through his Senior Special Assistant on Security, Ostar Christopher, during the Anambra State Cattle Menace Control Committee meeting held at the conference hall of the government house in Awka, the state capital on Thursday.

The meeting was chaired the Commissioner of Police in the state, John Abang and had in attendance the leader of the Cattle Breeders Association in the South-East, Gidado Sidikki, and some traditional rulers.

The governor warned that the state would no longer tolerate disobedience to government orders as demonstrated by some herders in the past who had continued to destroy crops, farms and the university environments in the state.

He said, “The action of the herders in the state has prompted this marching order and we are no longer going to tolerate such disobedience.

“We enjoin the herders and farmers in the state to obey the law or face the wrath of government.

“We will set up a committee to assess compensation for damages; but don’t be outrageous with your bills.”

The Chairman of Miyetti Allah Cattle Breeders Association in the South- East, Alhaji Gidado Sidikki, called for a cordial relationship between herders and host communities, promising to relate the government order to his members.