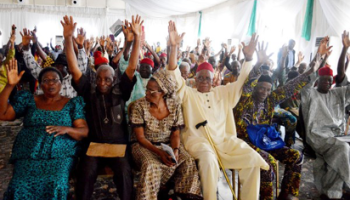 …Opts for out-of-court settlement of case before ECOWAS Court

Determined to quell rising agitation by secessionist groups, the Federal Government, yesterday, agreed to release N88 billion for the compensation of victims of the Nigeria/Biafra civil war, as well as for completion of demining and destruction of abandoned explosives within the South-East, South-South and North Central regions of the country. Federal Government, in terms of agreement it endorsed before the ECOWAS Court in Abuja yesterday, said while it would pay N50 billion compensation to “true victims” of the civil war that occured between 1967 and 1970,  a total sum of N38 billion will be paid to contractors for total and complete demining and destruction of abandoned bombs and landmines within the regions.

The decision followed a suit marked ECW/CCJ/APP/06/12, which was filed before the ECOWAS Court on May 2, 2012, by one Vincent Agu and 19 others against FG and five others. Federal Government opted for an out-of-court settlement of the matter after four years negotiation period. According to the agreement document which the ECOWAS court adopted as its consent judgment, two firms, RSB Holdings Nigeria Limited and Deminers Concept Nigeria Limited, were said to have been contracted in 2009 to carry out demining exercise in the war affected areas. Federal Government told the court that after an exercise that was conducted by medical experts that were employed by the two contractors to screen and identify true victims of the war, “All the parties to this suit acknowledge that 685 persons were selected and classified as survivors while 493 of them were confirmed as victims of either landmines or other dangerous military ordinance including locally fabricated weapons, hence entitled to compensation including their families and communities. “Whereas the parties also acknowledged that a total of over 17, 000 bombs were recovered and destroyed by the 4th and 5th Respondents (the contractors), while a total of 1, 317 are still in the stockpile located at the Mine Action Center, Owerri, Imo State, a large quantity of live bombs still litter the Applicant’s communities.” States listed to benefit  from the deal are Anambra, Rivers, Imo, Akwa Ibom, Delta, Ebonyi, Cross River, Abia, Enugu and Benue. The plaintiffs had in the suit they filed for themselves and as representatives of victims of the Nigerian civil war, including all the 493 victims pre-enumerated by the Ministry of Defence, demanded N100m as compensatory and general damages.

According to the terms of agreement sighted by our Reporter, while the N50bn compensation would be paid into United Bank for Africa, UBA, account No. 1018230076 which was nominated by counsel to the victims, Chief Noel Agwuocha Chukwukadibia & Co, the other N38bn woud be paid into Deminers Concept Nig. Ltd UBA account No. 1016296801, belonging to the contractors. Federal Government however maintained that the Terms of Settlement  shall operate as full and final  settlement of all claims arising from alleged violation of rights of victims of the Biafran war “in any other suits, action or matter however so called that may arise from this subject matter.” The Government said it agreed to release the funds, being conscious of unexploded bombs and other remnants of war that littered some parts of the South-East, South-South and North Central regions and the inherent dangers posed thereof. It said that it reviewed and took “full cognizance of the dire situation and unmitigated threat posed to the Applicants and their communities by aging bombs and other post war lethal materials left under the elements in public places like schools, churches, courts, farmlands and market places”, adding that it was agreed that the contractors, “having satisfactorily performed the 1st phase of the project be mobilised back to site to complete the final phase of the ongoing demining process.” Part of the 11 points resolution the ECOWAS court adopted as its judgment  on Monday  included: “That a Special Purpose Vehicle, SPV, comprising of all the necessary stakeholders shall be created for the implementation of the activities to ensure transparency and accountability. “That the Federal Republic of Nigeria undertakes to set up in the South-East, the National Mine Action Center in Owerri Imo State of Nigeria. “That every landmine, unexploded ordinance and explosive remnants of war discovered in the course of the jobs should be completely detroyed. “That the Federal Republic of Nigeria undertakes to rebiuld and or rehabilitate all public/private buildings already identified in the enumerated exercise by the war or used either as military facility or refugee camp during the war as contained in schedule 2 of this Terms of Settlement. “That the Federal Republic of Nigeria undertakes to construct one block of ten (10) classrooms for 50 communities presently barred from using their school facilities because of the presence of bombs and other post war relics; construction of court houses, churches and worship centers where explosive ordnance were found by the 4th and 5th Respondents. “That parties herein urge the honourable court to adopt as the consent judgment this Terms of Settlement in full and final settlement of this case. “That the Federal Republic of Nigeria shall implement the judgment order(s) of this honourable court to wit, payment of the agreed sum as contained in paragraph 16 and 18 above, within a reasonable time not exceeding 45 days from the day of this judgment”. Falana, Egbeyinka, signed on FG’s behalf Lagos-based human rights activist, Chief Femi Falana, SAN, and Mr. Shola Egbeyinka, signed the agreement on behalf of the federal government and it was documented as consent judgement by head of the ECOWAS Court panel, Justice Chijioke Nwoke.

It’s an interim stop-gap to placate Ndigbo – Ebonyi Igbo leader Reacting to the development, an  Igbo leader in Ebonyi State, Chief Abia Onyike yesterday described the move by President Muhammadu Buhari to pay N88 billion to the victims of Biafra  as an interim stop-gap to placate Ndigbo in the country. He said:”I welcome the gesture as an interim stop-gap measure to placate Ndigbo.   It will go a long way to assuage the painful horrors of the Igbo genocide. “However, nothing can replace the self-determination or independence of the Igbo nation as a distinct and autonomous mega ethnic nationality in Africa. Buhari has worked hard to extinguish Biafra and he will fail, the same way  Gowon and Murtala Muhammed failed.” Gowon responsible for Nigeria woes since 1967 — Biafra Zionists In another development, proactive pro-Biafra group, the Biafra Zionist Federation, BZF, has lashed out on ex-military dictator and former Head of state, Gen. Yakubu Gowon (rtd), calling him a coward and accusing him of lying. Gowon had recently granted an interview to a national newspaper  where he accused late Biafra leader, Dim Chukwuemeka Odumegwu Ojukwu of thwarting the 1967 Aburi accord which brought about the 3 years civil war.

But the BZF, yesterday, described Gowon’s statements as lies and  an  act of cowardice to have waited for 8 years after Ojukwu’s demise to make such preposterous claims. The group wondered why Gowon did not come out to speak when Ojukwu was alive and why he suddenly fell ill after returning from Aburi, Ghana, as he claimed in the interview. Leader of BZF, Mr. Onwuka Nsiegbe in a statement he released in Enugu, yesterday said it  was shameful for Gowon to engage in such a “high calibre twisting of history even at his old age.” While chiding Gowon for going to Aburi unprepared, Onwuka said, “he is a coward and a British stooge. “Why is he coming now to tell us what happened during the civil war; why didn’t he make these declarations when Ojukwu was alive; why did he wait until 8 years of Ojukwu’s demise  to say Ojukwu lied; why now?” He challenged Gowon to produce what he claimed to be the true Aburi Accord for the world to see if he was sincere that Ojukwu gave the accord a different interpretation.

Onwuka said, “Gowon is to be blamed for the crisis in Nigeria from 1967 till date; he caused the whole crisis. He could not control the killing of the Easterners as the then head of State.   The Aburi Accord would have sorted out all  Nigeria’s problems. “The Biafrans came up with a model; a Swiss confederation model; the East, led by Ojukwu went prepared; Gowon went there empty; he came up with nothing. “Now, having agreed and signed the accord,  it was expected that Gowon would come back and make an announcement but he refused to make the announcement; what happened? “The British government reached out to him and warned him not to implement the Aburi Accord; he was never sick. He was afraid that the Igbos would control the oil. “There was pressure on Ojukwu to tell the people what was agreed in Aburi. Gowon reneged on the Aburi Accord on the advice of British government. “If he were sick, what of his vice, what of his foreign minister, what of his information minister? So, he deliberately went incommunicado. That was the genesis of the crisis.” Onwuka added that “in further defiance to the Aburi Accord, this same Gowon created 12 states; the British government advised him to create 12 states instead of implementing the Aburi Accord. The East rejected it and that was the beginning of the full-blown crisis. “Ojukwu never envisaged secession; the Eastern region never envisaged secession; it was Gowon’s refusal to implement  the Aburi Accord and his subsequent creation of 12 states that caused all these problems which are still lingering till date. “Ojukwu’s only mistake was not accepting the offer from Russia. It was a diplomatic blunder; a diplomatic deficiency; failure to understand international politics. “Gowon  is  the cause of the civil war; he is the cause of all the problems facing Nigeria today. He brought this up now in order to weaken Biafra agitation; he is doing this to destabilize what we are doing about Biafra’s independence.” without knowing that he succeeded then because of international support from the United Kingdom. Biafra had none.” “Ojukwu’s only mistake was not accepting offer from Russia. It was a diplomatic blunder; a diplomatic deficiency; failure to understand international politics. That is why we are saying that only the United States can help us get Biafra. “He is already paying for his sins. Look at herdsmen massacring his people in Kogi, Nasarawa, Benue, Taraba, Kwara and the rest. These are the people he used to fight the Igbos. It same on both Danjuma and Gowon.”