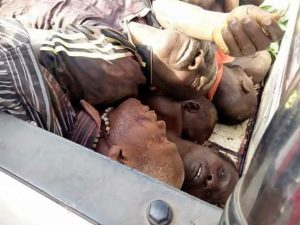 Against the backdrop of the spate of violence and killings across the country, National President of the Pentecostal Fellowship of Nigeria, Dr. Felix Omobude, has said Nigeria is “degenerating into a failed state.”

Omobude lamented that killings by armed herdsmen and other criminals have gone on, in such a manner that they have become a daily affair.

The PFN president said these in an interview with newsmen in Benin, capital of Edo State, yesterday.

“There is hardly any day that you do not hear of bloodshed, killings, either by Boko Haram, through suicide bombing, or herdsmen killings across the country. The PFN is worried as Nigeria is degenerating into a failed state.

“Whereas we have a government in office, it appears that this situation is overwhelming our security forces.”
The cleric, who is also founder of the New Covenant Gospel Church, called on government, at various levels, to ensure the safety and security of Nigerians, irrespective of tribes or religions. We hold the current administration to their campaign promises of change for the better. We call on the president of the Federal Republic of Nigeria and his government and the ruling party to take a look at the promises made to Nigerians and make every effort to fulfill them,” Omobude added.

The PFN president faulted President Muhammadu Buhari’s claim that those responsible for the killings were not herdsmen but fighters who had infiltrated the country from outside, presumably from Libya.

“We are amazed that our president can announce that in the UK and US and has not said it at home. But, even if that was the truth, if someone is using my name to perpetrate evil, I should fight it and stop him from doing so. So, if these people (herdsmen) are coming from outside, it is the government’s responsibility to check the borders and fish them out.

It is not my responsibility. It (government) should do the needful. Honestly, whatever language you use to describe their activity, it all points to terrorism. People go out and say that they are cattle rearers, only to bring out AK-47 rifles, kill owners of farms, rape their wives and disappear into the thin air. So, it is terrorism.”

Asked if the president has done enough to check insecurity in the country, the PFN president replied: “I will leave that to Nigerians to decide. What the PFN is saying is that it is the responsibility of government to safeguard the people. So, if it were enough, we would not have been crying.

“The cry is all over the place, across party lines. When we are dealing with this issue, we should not be thinking about parties. We want it stopped; it does not really matter to us which party is ruling. We want good government. We want peace and security for all Nigerians.”

Regardless, in his reaction, spokesperson of Afenifere, Yinka Odumankin, said the only way Christian and non-Christian communities can stop the killings is by getting their Permanent Voters Cards (PVC) and joining political parties.
“The killings going on across the country on a daily basis is getting worse and it is good that PFN is now speaking out.
“Do you want any responsible person to just keep quiet? I advise both the Christian and non-Christian communities and those who are opposed to the killing right now to get ready and organise themselves, not just to get their PVCs, they should join political parties and make sure that the parties present alternatives. No country can afford the level of killings going on in the country. There is an unwillingness to stop the killings in the country and we cannot continue like this, there must be a change of direction.  I urge everyone who value human life to get ready to participate in the election and make sure that things change.”

On his part, National Chairman of the United Progressive Party (UPP), Chekwas Okorie, said the statement by the PFN president paints a milder picture of the true state of security in the country.
He said the country is heading towards anarchy and if nothing is done, could disintegrate before even before the 2019 elections.

“It is very mild and weak to say that the country is heading into a failed state; Nigeria is heading towards anarchy and total disintegration. A failed state can still survive but when a state is in anarchy, the state ceases to exist. We are heading to a total collapse and everybody is seeing and saying it. My fear is the human disaster that will result to what is imminent and if nothing is done, it will affect the entire African continent. Honestly, I am afraid to say that Buhari has been out rightly overwhelmed by the security situation, he has no clue on what to do.
He was initially reluctant to address the killings by herdsmen but, right now, he doesn’t know what to do anymore…
because the situation has gone beyond his capacity to control,” Okorie said.