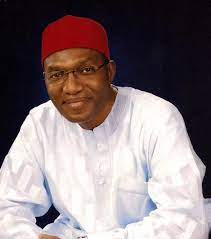 The All Progressives Congress, APC, governorship primary elections which held on June 26, 2021, has been nullified by the Independent National Electoral Commission, IgbereTV reports.

According to the monitoring team for the election, it has been confirmed that the election that produced Andy Ubah as its winner is nonexistent as no elections held in any of the wards all around the state.

IGBERE TV recalls that the Senator who represented Anambra South in the 7th and 8th Senate, Dr Emmanuel Nnamdi Uba, popularly known as Andy Uba had been declared the winner of the All Progressives Congress (APC) primary election, held on Saturday, June 26, 2021.

The declaration was made by the Chairman, Anambra State APC Primary Election Committee, Governor Dapo Abiodun of Ogun State.

But NEC disclosed on Wednesday, reported that the June 26 APC governorship primary in the Anambra state did not hold.

The commission said that in all the 326 electoral Wards of the state-monitored, that none of the APC team saddled with the responsibility to conduct the primary.

The commission said the electoral officials and materials were not available at the voting centres for the APC governorship primary scheduled for 26 June 2021 in Anambra state, up to 5;30pm when INEC monitors withdrew from the field.

The commission’s monitors did not witness accreditation, voting, counting of votes, collation or declaration of results at the voting centres and collation centres up till 5:30pm when the monitors were recalled.

Recall that 11 of the 14 governorship aspirants of the All Progressives Congress (APC) in Anambra have said the June 26 governorship primary in the state did not hold.

Dr George Muoghalu, the spokesperson for the aspirants, made the position of the group known in a press conference on Saturday in Awka.

Muoghalu said that in all the 326 electoral Wards of the state, people came out, but were disappointed, saying that none of the APC team saddled with the responsibility to conduct the primary and the Independent National Electoral Commission (INEC) officials was seen.

Muoghalu, the Managing Director of National Inland Waterways Authority (NIWA) and one of the aspirants, said anybody who claimed that there was primary is fraudulent and did not wish APC well in the November 6 election.

Paul Orajiaka and Edozie Madu, both aspirants, corroborated the position of Muoghalu and warned that the era when one man would come up with fake figure to claim victory is over.

The aspirants, however, appealed to the party leadership to come up with a fresh date for the Anambra primary to ensure that the party beat the deadline in the Electoral Act.