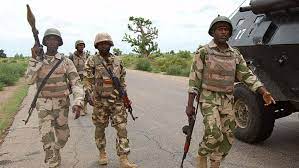 The Nigerian Army has deployed its personnel to some Imo State communities to carry out raids, discreet searches and arrests of youths and residents who are suspected to be linked to the Indigenous People of Biafra and its security arm, the Eastern Security Network, According to SaharaReporters, Multiple sources said the military personnel, suspected to be led by the 34 Artillery Brigade, Owerri, since Sunday have been arresting male residents and youths, particularly in Oguta and Ohaji communities and clamping them into vans and taken to unknown destinations.

“We have been getting distress calls from our relatives and people that the army sent its men to surround communities in Ohaji, Osu, Agwa and Izombe. They have been abducting some male youths

It is an abduction because nobody among those arrested knows his offence, where they are taking him to or is able to communicate to his relatives before he is taken away. The military are forcing them in their vans,” a source stated.

women are among the victims being raided too.
Some of our women who went to farms have not returned since. People from Oguta, Ohaji communities, who have relatives in Owerri town are fleeing, because the army wants to turn our villages into deserts. What is all this search because of IPOB and ESN? Is it by emptying our villages that you arrest IPOB and ESN? Won’t people go to their farms again?” a resident said.