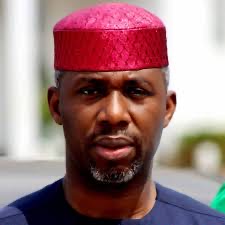 Former Chief of Staff  to Imo State  Government  and son -in-law to former Governor Rochas Okorocha, Mr Uche Nwosu said yesterday that he was accused of supplying arms to militants.This allegation was contained  a petition  made to the police  by  yet-to-identified individual.

Nwosu made this known  in Owerri, while narrating the  experience of  his  arrest by security operatives at St Peter’s Anglican Church Eziama-Obiere, in Nkwerre Local Government Area of Imo State  during the outing service of his late mother, Jemimah Nwosu, last Sunday.

He  explained that he was taken to the Police Tactical Squad office in Abuja, where he was told by the police that  “Someone wrote a petition against me (Nwosu), that I was supplying arms to militants and giving them money.”

He added that there was no time that the police officially invited him to come and answer questions from the petition against him.

He  therefore  demanded from the Inspector General of Police, IGP,  Usman Alkali Baba  to investigate the owner of the private jet which was used to fly him  from Enugu to Abuja.

Nwosu spoke as the former  governor of the state and his father-in-law Rochas Okorocha expressed  shock over Nwosu’s experience in the hands of his abductors.

This is even as the  Indigenous People of Biafra, IPOB, yesterday, described as a sacrilege, the  alleged abduction  from  a Church  service, condemning the  act in  its  entirety.

IPOB said  the  abduction  has exposed the masterminds of insecurity in Imo State, adding that it is a vindication that  IPOB and Eastern Security Network, ESN, are not  responsible  for the numerous attacks, abductions/kidnappings in  the state  contrary to alleged false accusations and propaganda by the  state  government against the pro Biafra group.

Narrating his ordeal, Nwosu said: “The petition the  Police  said was from somebody  stated that their reason  for arresting me  was  that I was  supplying arms to militants and giving them money. The whole plan was cooked up in Imo State Govt House. The security men attached to the Government House, one Shaba was behind this plot.

“The  plot was to  humiliate  me and malign my image. No security man from  Abuja or the state command came for that operation. Those  security  officers were all security men attached to the government of Imo State.

A  normal policeman cannot behave the way they did. They came and shot inside the church which no professional police officer would do. They shot anyhow. They are a killer squad from the Government House.

“Nobody invited me or called me on phone. I would have answered but I did not receive any invitation from the police. So, just like that, they came, arrested  me and handled me like a criminal and treated me like I have committed an  offence.

“I want the Inspector General of Police, IGP, to investigate the person who ordered for my  arrest and the owner of the private jet and who paid for the private jet that took me from Enugu   to Abuja. They took me to the tactical squad office and the IG sent somebody to come  and interview  me and I gave  my statement. From what I gathered,  the IG was not properly briefed on what was going on.”

However, the Imo State Government through the Imo State Commissioner for Information and Strategy, Declan Emelumba, has maintained  that  the  government has no hand in the  events that led to the arrest of Nwosu and that  it was purely the  activities of the security operatives, adding that they should wait for the outcome of the investigation of the police.