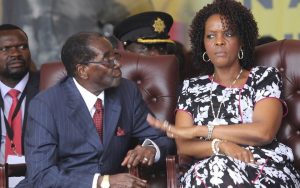 Grace Mugabe, the wife of Zimbabwean President Robert Mugabe, is reported to have fled the country for neighbouring Namibia.

Her husband is thought to be under house arrest in the southern African country’s capital, Harare, after the Zimbabwean military took control of the government.

It is unclear how Ms Mugabe was able to make her escape.

Eddie Cross, an MP from the main opposition party, Movement for Democratic Change, said he understood the First Lady was now in Namibia.

A representative for the ruling Zanu-PF party also said he believed she was no longer in Zimbabwe.

It comes after Zimbabwean army generals seized power and detained senior officials, including Finance Minister Ignatius Chombo, as part of a round-up of “criminals”.

Soldiers blocked roads around the main government offices, parliament and courts and took control of the national broadcaster. Gunfire was heard in the area around Mr Mugabe’s home.

In a statement read live on state television, Major General Sibusiso Moyo said Mr Mugabe, 93, and his family are “safe and sound and their security is guaranteed”.

The move could be an attempt to install Mr Mugabe’s former deputy, Emmerson Mnangagwa, as president. Mr Mnangagwa was sacked last week in a move seen as paving the way for Grace Mugabe to succeed her husband as president.

South African president Jacob Zuma said he had spoken to Mr Mugabe by phone and described him as being “fine” but “confined to his home”.