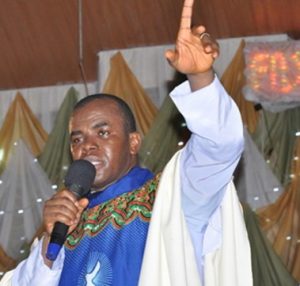 Ahead of the December crusade, spiritual director of Adoration Ministry, Enugu, Rev. Fr. Ejike Mbaka, has vowed to support youths to take over leadership positions in the country.

The Enugu Catholic fiery priest made this declaration during his ministration at an all-night inter-denominational crusade organised by the Directorate of Inter Faith, National Youth Council of Nigeria, which was hosted on the Adoration Ground with pastors and youths in attendance.

Waxing biblical on his ministration tagged: “Nullifying the counsel of Ahithophel,” Fr. Mbaka charged the youths to stand up for leadership roles in the country and stop being used as stooges and political thugs during elections.

“The time of old and incompetent politicians using the youths as thugs was over. It is pathetic that men the youths should be leading are ironically leading them. It is a shame to our youths,” he lamented.

The cleric disclosed that he had earlier charged all worshippers in his ministry to acquire voters’ cards, and warned that he would take stern measures against worshipers who do not have voters’ cards “as that amounts to sin as it paves way for the election of wrong and corrupt leaders.”

He said he was feeling the brunt of evil leadership the more as unemployment and social problems created by bad government hasstretched his charity work.

Mbaka also prayed for the youths against every physical and spiritual inhibition that would stop them from experiencing their breakthroughs and taking the pride of their positions in their families and the society.

As he preached, hundreds of the youths filed out to give testimonies of miracles of healings and breakthroughs they received instantly on the Adoration Ground as he ministered.

Some of those who testified claimed that they were deaf from birth but had their ears opened while others claimed that their tumors had disappeared, and those with hemorrhage healed.

Mbaka looking at the youths said that their testimonies were proofs of the nullification of the counsel of Ahitophel in their lives.

He dedicated the offerings received at the event to the pastors from other denominations and pledged to reimburse all expenditure incurred by organisers of the event.

The all-night youth programme ushered in the commemoration of the Christ the King celebration at the Adoration Ground the following morning, when Catholic faithful took to the streets across the country to praise Jesus Christ.

In a chat with newsmen, President of the Women Association of the ministry, Mrs Ann Aligwe, expressed happiness that the event could hold at the ground, barely one year after their spiritual director was transferred from the Christ the King Parish Enugu.

Also speaking, the ministry’s Media Assistant, Mr Ikechukwu Maximus Ugwuoke, revealed that Fr. Mbaka had released the theme of this year’s crusade as ‘Awesome Miracles from God,’ and urged worshipers to come to the Adoration Ground, which he referred to as a solution centre.

He stated that the ministry is well-prepared and ready to welcome the multitude that would come to the ground during the crusade and on the last day being December 31.