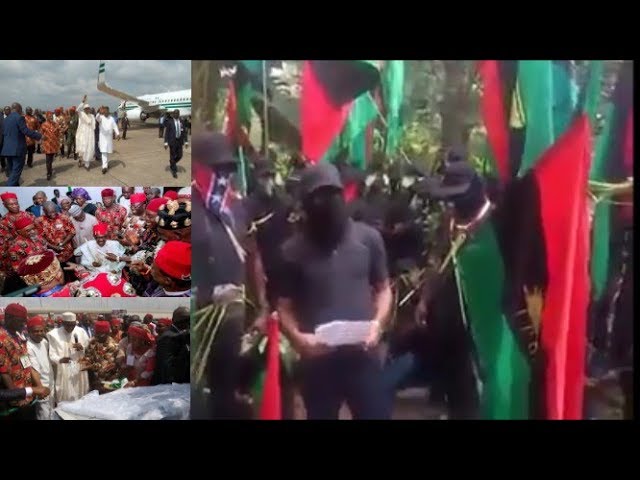 NNEWI—THE  Indigenous People of  Biafra, IPOB, has accused the Federal Government  of conniving with the judges handling its cases to frustrate the body, through deliberate delay and refusal in approving its applications for certified true copies of processes it filed.

This came as the leader of Biafra Independence Movement,BIM, Chief Ralph Uwazuruike, has again, appealed to the United States President,, Donald Trump to accord recognition to Biafra as he did to Jerusalem, the Isreali capital.

IPOB in a statement by its Media and Publicity Secretary, Comrade Emma Powerful alleged that  “IPOB has appealled to Justice Abdul-Kafarati after his ruling, that his expeditious approval of our application for the certified true copy of processes filed in the suit is needed  to lodge immediate appeal against his ruling, but it was denied. “Shortly after ruling on our  application to vacate the obnoxious order proscribing IPOB, we respectfully brought to the attention of the Judge, our desire to appeal his ruling almost immediately. We also pointed out the frustration we suffered in the past and continue to suffer in getting Nigerian judges to approve our  applications for certified true copies of their judgments to enable us proceed to court of appeal, but our request was not granted.

The exparte order proscribing IPOB granted on the 20th September 2017 by Justice Abdul-Kafarati is a case in point. “In the past, we have through our lawyers, requested all processes filed in the suit by the Attorney General of the Federation to be certified by the judge to no avail. This request took the judge almost one month to grant. “Approval of application for certified true copy of processes filed in a suit is the most menial administrative duty to be performed by a serious minded judge. But in our own case, the reverse has always been the case. “This exposes high  powered conspiracy and a judge playing to the script of the cabal who are hell bent on frustrating the efforts of IPOB to clear it’s name through a legal system that is dominated by those that desire to Islamize non Muslim Southern Nigeria by force of arms. “In an open court on the 18th day of January 2018, before local and international media, an appeal was made by IPOB attorney to Justice Abdu-Kafarati after his ruling, that his expeditious approval of our application for the certified true copy of processes filed in the suit is needed for us to lodge immediate appeal against his ruling, but at the time of this press statement Justice Abdul-Kafarati,   24 hours after his ruling, has refused to approve our application for leave to appeal his ruling.

“All orders made in the suit and exhibits relied upon by the government must be made available to IPOB by law, to enable us promptly proceed to the court of appeal, but the Nigerian government through the judges handling our cases deliberately refused to obey what the law said, just to please their pay masters.

“It is unfortunate that this is the same government that claims to be fighting corrupt judges by arresting and prosecuting them in the courts, yet they have turned blind eyes to what the judges handling our cases are doing simply because they are playing their script. Nigerians should therefore not take this government serious in their purported fight against corruption. “The fight against corruption in Nigeria should be extended to Judges handling IPOB cases if Nigerians and the world must take the  APC government serious when they talk about fight against corruption. “It is high time Nigeria does away with these establishment judges who have been known in Nigeria for handling ‘dirty’ cases and giving kangaroo and black market judgments meant to please governments in power. We know the predispositions of such Judges. They still abound in the Nigerian judiciary.” Give us Biafra, Uwazuruike begs Trump In his appeal to Trump, Uwazurike cited the failure of the All Progressives Congress, APC-led Federal government of Nigeria to protect lives and property of its citizens by giving free hands to northern militias like the Fulani herdsmen and Boko Haram insurgents. Uwazuruike stressed that a free state of Biafra will assist America in the global war on terrorism and other vices which portend danger to the free world. In a statement issued to newsmen and signed by BIM’s Director for Information, Mazi Chris Mocha, Uwazuruike added that the New Biafra upon its recognition as a sovereign state, would definitely move its Embassy to the Israeli capital in Jerusalem. It is unfortunate Buhari is still confused about reasons for struggle .