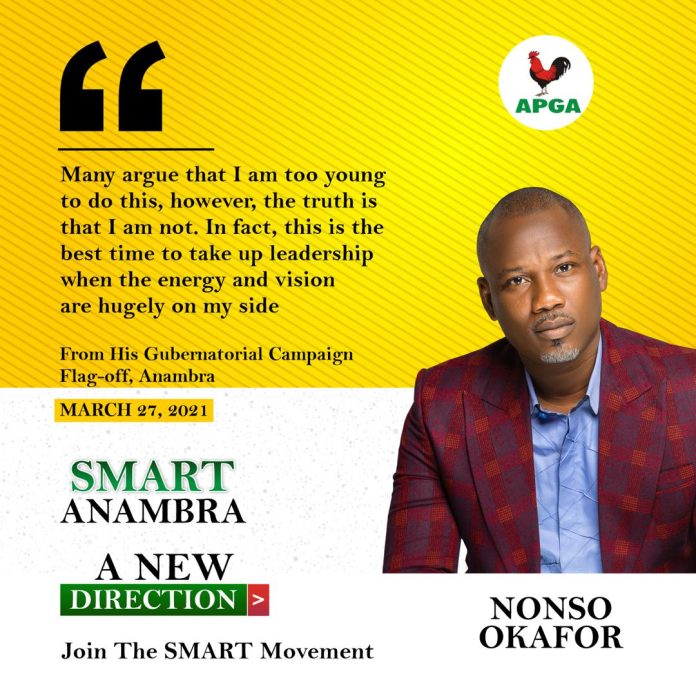 Saying Smart Is Too Young To Govern Anambra State Is A Big Insult To The Entire Anambra Youth.

Those presently telling Hon Nonso Okafor popularly known as Smart to step down from the Governorship race because of his age are not just insulting Smart but the entire Anambra Youth.

Youths in Nigeria are not new to political leadership and Governance. Without the role and vibrancy of the youth, perhaps Nigeria wouldn’t have gotten her independence in 1960.

The first genuine Nationalist organization that was founded in Nigeria was The Nigerian Youth Movement and which was founded in 1934 by three progressive youths namely; Prof Eyo Ita at 31yrs, Samuel Akinsaya at 36yrs, and Ernest Ikoli at 41yrs.

The Nigerian Youth Movement subsequently partnered with other upcoming Nationalist movement and formed the party known as the National Council of Nigeria and Cameron NCNC, which, at the time was powered by a Youth known as Nnamdi Azikiwe. It was the voice of the youth that gave us our Independence.

Our most respected Igbo leader, Dim Chukwuemeka Odumegwu Ojukwu was 34 yrs when he became the Leader of the Biafran State. With his young energy, wisdom, and strength he withstood the Nigerian federal forces for three years of war until the war ended.

As a youth, he defended the entire Igbo race, produced a system of Government (The Aburi Accord) that truly would have been the best system of Governance in Nigeria. Nigeria and the Igbo nation are still suffering till date from its non-implementation.

Another great Igbo leader known for giant strides achievements is Dr Michael Okpara. Dr Michael Okpara was a youth when he became Prime Minister of the Eastern Region. He was 39yrs old when he assumed the position in 1959. By 1964, five years after Okpara’s ascendancy to the premiership – Eastern Nigeria, as recorded by a research group in Michigan State University in the US, was the fastest growing and industrializing economy in the world – ahead of Malaysia, Korea, Taiwan and Singapore.

The youthful Premier was fully in charge of the fastest growing and industrializing economy in the world- the Eastern Nigerian economy. That period was regarded as the golden age of Nigeria’s development.

Even in this 4th republic, Nigeria has produced quite a number of young politicians and youth governors.

Chimaroke Nnamani became the governor of Enugu State at 39yrs.

Bukora Saraki was 38yrs when he became governor of Kwara State.

Many of the Governors in the fourth republic were in their early 40’s when they became the Governor of their state.

Outside Nigeria, we have lots of young leaders in their 30’s that are leading their nation to greatness.

Jacinda Ardern leader of the New Zealand Labour Party became Prime Minister in 2017 at the age of 39 years.

Nayib Bukele was sworn in as President of El Salvador’s after winning the election 2019 at 38yrs.

Sanna Marin, was sworn in as Prime Minister of Finland at 34yrs.

This analysis has proven that being young is never a barrier to good governance, what is needed is the political will to execute and implement progressive policies and these attributes are readily found in Smart.

In all standard and judging from Smart past leadership activities, he has shown and proven he has the capacity and well-articulated clear cut vision to govern Anambra State. His current impact and contributions as a member of Anambra State House of Assembly has shown he is prepared to lead the state forward.

Smart has emphasized overtime that “being young is only an added advantage to our ability and willingness to solve the problems of our time. And why we have the advantages of youthfulness, ours shall be, like in any progressive government, a government of all the people, not of a few or of select few, on the basis of age, education or other social standing”.

Therefore those telling Smart to step down from the Anambra 2021 Governorship race on the basis of his age are not just insulting him but the entire youth constituency and I urge every youth to resist this insult with every fiber in their veins.

The truth is that it is the fear factor of loosing to Smart which is akin to the biblical story of David defeating Goliath that pose the main reason why some people are intimidating Smart to withdraw from the race.

I urge the All Progressive Grand Alliance (APGA) to conduct a free and fair primary election and let the people’s choice emerge.

Let those who claim their age is the rightful age to be Governor Come and prove their strength at the Primaries.

I urge every youth in Anambra State to wake up and support Smart as he is the bridge between the old and new, the older and the younger generation, the new idea of positive change and renaissance.

This is an idea whose time has come. It’s Youth O’Clock. Let the youth arise.