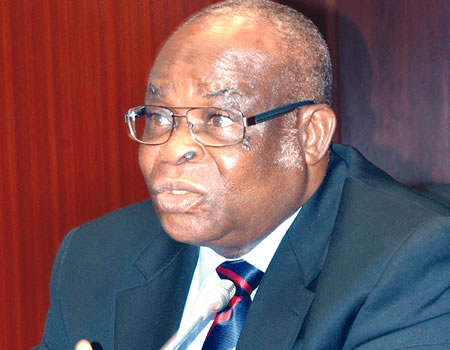 He suspended the CJN based on the order of Code of Conduct Tribunal (CCT) on January 23rd and immediately swore in Ibrahim Tanko Mohammed from Bauchi state as the new CJN. Mohammed is the next in line to Onnoghen. He was sworn in Friday afternoon inside the council chamber of State House Presidential villa Abuja. The swearing in was done by the President after he  signed the new Executive Order 007.

Mohammed was driven into the forecourt of the President’s office at about 4:30pm in a black Mercedes Benz C240 with number plate GWA:900FA.

Speaking on Justice Onnoghen, President Buhari said, “since he has charges of corruption filed against him, he would have acted smoothly to spare our judicial arm further disrepute by excusing himself from superintending over it while his trial lasted. But unfortunately, he has not done so, instead the nation has been tilted to the scuffle of spectacle of judicial adjudicate in which the Chief Justice of Nigeria and his legal team have made nonsense of the Court of Conduct Tribunal to hear the allegation and conclude the charges as quick as possible.

“We have all seen the conduct of the Chief Justice of Nigeria, decent on the one of the heads of the court of justice under his control by not obeying the office of this court from the chairman to the judges. Not only the trial court, but others have been put on the spot. Practically, every day since his trial commenced, the nation has witnessed various courts granting orders to counter the case in favour of the CJN. Nigeria is a constitutional democracy, and no one can be or be seen to be above the law. No ordinary Nigerian can get the swift and the kind of support the CJN gets from his subordinates.

“As a government, we cannot stand and fold our hands helplessly. The effort of the executive will amount to nothing without the cooperation of the other arms especially the judiciary. This government is concerned about the suspected persons facing corruption trials have been set from under the watch of the CJN. This has clearly defeated the effort of this administration to develop and prosper. It is against this background that I receive the notice from the CCT directing me to suspend the CJN until final determination of charges against him.

“Therefore, with the directive of the CCT in a letter dated 23rd January, 2019, accordingly, I hereby suspend HON Justice Walter Nkanu Samuel Onnoghen as the Chief Justice of Nigeria until the final determination of the case against him in the Court of Conduct Tribunal. In further compliance to the request of the CCT, I hereby, order Hon Justice Ibrahim Tanko Mohammed being the most senior justice in the Supreme Court, to come up and take his oath as the Chief Justice of Nigeria in acting capacity.”

One of the first to react was the presidential candidate of the Peoples Democratic Party (PDP),  Atiku Abubakar,  who described the suspension  as “dictatorship taken too far “.

Atiku, in a statement, he personally signed,  urged Justice Onnoghen and the judiciary to resist the suspension with every legal and constitutional means possible.

He charged Nigerians to save the country from dictatorship by voting against President Buhari in the February 16 presidential poll,  noting that it is symptomatic of the increasing desperation that President Buhari and the cabal pulling the strings have as February 16, 2019 draws near.

“The fact that the unlawful suspension of Chief Justice Walter Onnoghen was announced just as it became public knowledge that the CJN was constituting the election petition tribunals is not lost on discerning Nigerians and the international community. This act of desperation is geared towards affecting the outcome of the 2019 Presidential elections. Indeed, it is not just the CJN that has been “suspended”, it is the Nigerian Constitution that has been infracted and, in effect, suspended.” under the guise of the suspension of the CJN.”

Senate President, Dr. Abubakar Bukola Saraki described the suspension as a coup against democracy and a “deliberate attempt to endanger our hard-won democracy.

Saraki, in a statement signed by him noted that by the suspension of the CJN, Buhari has acted outside the provision of the constitution, has exercised the powers which he does not have and that this action amounted to gross misconduct.

“This is an action aimed at undermining the nation’s judiciary, subverting the constitution, intimidating judges of all the courts of record, and creating uncertainty in the electoral process, thereby laying the  foundation for influencing the outcome of litigations that might arise from next month’s elections.

“There are already the general belief that this hasty action was taken to pre-empt the already scheduled inauguration of election petition tribunals by Hon. Justice Onoghen and to destroy national institutions that are perceived to be unco-operative in his bid to manipulate the electoral process leading to next month’s general elections.

“By unilaterally suspending the CJN without following the provision of the constitution, President Buhari has taken an action which amounted to gross misconduct. He has simply sent a dangerous signal to the entire world  that Nigeria is no longer a democratic nation and that we have returned to the old, jaded era of military dictatorship .

“Our constitution makes no provision for suspension of the nation’s highest judicial officer. The constitution provides a clear process for removal of the CJN and specify the roles of the three arms of government, beginning from the National Judicial Council (NJC), the National Assembly and lastly, the Presidency, have different roles to play in that process. There is no condition under which the President can usurp the powers of other arms of government. I do not know where the President and his advisers got this idea of suspending the CJN on the so-called order of the Code of Conduct Tribunal  but this is novel, disingenuous and alien to our laws.

“It is strange that President Buhari is claiming to be taking orders from a Tribunal which has been ordered by a superior court to halt all actions on the trial.

“With this action, President Buhari has initiated a process the consequence of which nobody can predict. They have precipitated a constitutional crisis.

“At this point, all democratic institutions in the country, the international community and democrats across the world should rise against this blatant act of impunity. We should jointly condemn this retrogressive, uncivilized and despotic measure”, Saraki stated.

He then called on the President to immediately reverse the decision and allow the due process of law to take its natural course in determining the guilt or otherwise as well as the suitability of Justice Onnoghen to continue as the head of the nation’s judiciary.

Also, particularly angered by the development were prominent lawyers who condemned President Buhari’s action, saying that he acted outside the constitution.

Chief Mike Ozekhome (SAN) described the suspension of the CJN from office as undemocratic and enthronement of full-blown dictatorship in Nigeria, by torpedoing the entire judiciary, rule of law and due process including four valid High Court/Federal High Court rulings and the ruling by the Court of Appeal staying proceedings of his trial at the Code of Conduct Tribunal (CCT).

He called on lawyers and the Nigerian Bar Association (NBA) to shut down all the courts in protest of Justice Onnoghen’s suspension until he is returned to his seat.

Ozekhome who spoke to Saturday Sun also called on the National Assembly to shut down in protest. He added: “The alleged suspension of Justice Walter Onnoghen from office of the CJN is the vilest, thieving, most despicable, ultravires, undemocratic and brazenly unconstitutional act ever carried out by any government in Nigeria, civilian or military, since 1st January,1914,when the contraption called Nigeria was forcibly contrived through the  amalgamation of Northern and Southern Protectorates.

Another Senior Advocate of Nigeria, Chief James Onoja described the suspension and the consequent swearing-in of Justice Tanko in acting capacity as unconstitutional and an impeachable offence.

Chief Goddy Uwazurike, former President of Aka Ikenga and a lawyer said that in suspending the CJN, the President has thrown Nigeria into a constitutional crisis.

The Southern and Middle Belt Leaders said Buhari was trying to cause a constitutional crisis owing to his desperation and morbid desire to foist the rule of thumb.

In a statement signed by Chief Edwin Clark (South South), Chief Ayo Adebanjo (South West), Chief John Nwodo (South East) and Dr. Pogu Bitrus (Middle Belt), the organisation alleged desperation by President Buhari, saying that the suspension of the CJN will cause constitutional crisis and should be resisted.

Opposition political parties on the platform of the Coalition of United Political Parties (CUPP) said that Onnoghen’s suspension is a judicial coup that must be resisted by all lovers of democracy.

In a statement signed by Ikenga Ugochinyere for the CUPP, the coalition alleges that Onnoghen’s removal is aimed at stopping the swearing in of members of the 2019 general election petition tribunal.

Similarly, elder statesman, Tanko Yakassai and former Minister of Transportation, Ebenezer Babatope, both said President Buhari’s action would lead the nation into anarchy and is capable of destroying democracy.

The Peoples Trust presidential candidate, Gbenga Olawepo-Hashim, accused President Buhari of committing an impeachable offence, saying it must be condemned by all lovers of democracy.

Chief Mike Ahamba, SAN, former lawyer to the President, urged Nigerians to resist the traits of dictatorship being displayed by Buhari’s administration.  Former Attorney-General, and Commissioner for Justice in Cross-River State, Mrs Nella Rabana, SAN,  said the president’s action must be resisted.

In  a statement issued on its behalf by  Mr. Yinka Odumakin, the Southern and Middle Belt Leaders Forum described the president’s action as a coup against constitutional democracy. “.Section 292 of the amended 1999 Constitution is clear that the President can only remove the CJN with 2/3 of Senate resolution. To us what has been done is resort to self-help after the Court of Appeal issued an order stopping the trial of the CJN by the CCT presided over by a man answering charges in court over corruption allegations but who is still in office. ’’

The Secretary General, Eastern Consultative Assembly, Elliot Uko said President Buhari must not be allowed to derail democracy through his action.

The President, Arewa Youth Consultative Forum, Mustapha Yerima, called on members of the civil society to speak  out in order to protect democracy. “The independence of the judiciary must be protected. Due process must be followed. Buhari must be told that we are in a democracy and not autocracy or dictatorship’’.

Meanwhile, the All  Progressives Congress (APC) has endorsed the decision of President  Muhammadu Buhari, to remove the Chief Justice of Nigeria (CJN), Justice Walter Onnoghen.

APC’s National Publicity Secretary, Mallam Lanre Issa-Onilu, said that though the party is not supposed to react to decision taken by the APC-government, the party can only confirm that it is solidly backing Mr President.

Prof. Itse Sagay said Buhari’s suspension of Onnoghen in the present circumstances is in order. “Those SANs defending him are legal parasites who have been trying to frustrate his trial, to prevent him from facing the music.” Sinatu Ojikutu, former Deputy Governor of Lagos said Onnoghen’s suspension is the right step in the right direction.