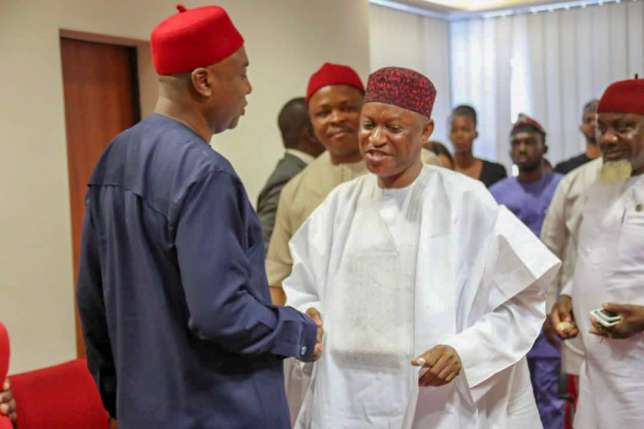 In a statement by Saraki’s Chief Press Secretary, Sanni Onogu, the leaders of the political parties had paid the Senate President a solidarity visit at the National Assembly.

The Chairmen and leaders of 45 registered political parties were led by the National Chairman of the Democratic United Party (DUP), Chief Perry Okpara.

During their meeting, Saraki said as direct representatives of the people, lawmakers will continue to play their role to ensure that the rule of law is followed and that human rights are respected in the country.

The Senate President also reiterated the resolve and commitment of the 8th Senate and indeed the National Assembly, to continue to protect and defend the nation’s fledgling democracy.

Okpara, who led the leaders of 45 political parties that visited Saraki told the Senate President that the visit was to show their solidarity with the leadership of the National Assembly for standing up in defence of democracy in the face of the recent siege in the complex by operatives of the Department of State Services (DSS).

Okpara also condemned the DSS siege on the National Assembly and declared that as national leaders of political parties in the country, “we cannot sit by and watch our country slide into the Hobbesian state of anarchy, where life has become short, brutish and lawless.”

This is what Saraki told leaders of 45 political parties

Saraki had the leaders of the 45 political parties that visited him that the perpetrators of the recent siege on the National Assembly have learnt their lesson from the wide condemnation that has continued to trail the anti-democratic action.

He said: “I thank you for taking out time to be with us here today. Thank you for the solidarity message and we truly appreciate it as it encourages us to further do what we are doing to defend democracy in our great country.

“The big thank you goes to all Nigerians that stood with us and have come to support us here in  the National Assembly because in supporting us, you are supporting our democracy.

Continuing, the Kwara representative said: “It is our hope that those anti-democratic forces have leant their lesson in the last few days, to listen to the voice of Nigerians – men, women, boys and girls – all across the country, who stood firmly to reject their unconstitutional and anti-democratic action.

“Some have paid the ultimate price and we must respect that and ensure that Nigeria, as a country, is a shinning example for other democratic nations to emulate. We must not allow anything that will tarnish the image of this country and the democracy we have worked so hard to birth and sustain,” he stated.