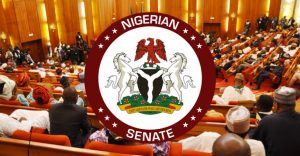 The political arm of the Biafran struggle, Movement of Biafrans in Nigeria (MOBIN) has submitted its Memorandum on the way forward for Nigeria and the peaceful co-existence of all the ethnic nationalities that make up the country.

The document was submitted to the Nigerian Senate on the amendment of the 1999 constitution of the Federal Republic of Nigeria, based on sections 2, 3, 4(2) and 162(2) and in line with the support of the international community.

Titled ‘Memorandum for the Devolution of Powers ‘, the Memorandum consist of the Legal, Political and Socio-Economic Basis, Position of the 4 Regions of the South and Middle Belt on Regional Autonomy, Issues and Prayers before the Court, and the International dimension and the British Government
Policy of 1969.

Other areas mentioned by the Memorandum include Evidence of Institutionalised Persecution of the Plaintiffs(Biafrans) in Nigeria, the Problem of Nigeria beyond Politics, the perfect solution to the Nigerian problem, Approval of Regional Government by the Igbo National Leadership, the Confessions of honest leaders from other ethnic nationalities Approval of Regional Government by all Peoples and Leaders of Southern Nigeria.

Other items in the document also include the Benefits of Devolution of Power to the Nigerians and
the International Community, Re-Engineering of the Federal Structure based on
our proposed Amendments to the 1999 Constitution.

It was signed by Barrister Emeka John Chigozie Emekesiri, a Barrister and Solicitor of the Supreme Court of Nigeria, and also the Chairman of the Governing Council of the Customary Government of Biafra.

It concluded by observing “If the report on the bill for devolution of power has been laid before the National Assembly, what then is holding the bill from being debated?

“We are very sure that the bill shall pass by simple majority votes of the members of the National Assembly. Let somebody move the motion in the National Assembly and let the debate begin without further delay. A peaceful coexistence of all ethnic nationalities in Nigeria will bring prosperity and social mobility that is lacking.

“We propose a British Model or American model that will provide an equitable opportunity for various nations within Nigeria where each nation is allowed to grow at its own pace and more especially, where healthy competitions take place between the nations.

“It is important that the Nigerian Governments adopts this model as a means of creating stability and economic progress for the majority of Nigerians. We want to be free to govern ourselves as a people within Nigeria, grow at our own pace and contribute to national wealth, socio-political and economic development without institutionalised persecution by government with its obnoxious policies targeted at us. We request the Senate Committee on the Amendment of the 1999 Constitution to introduce the bill on Devolution of Power to the Regions as a matter of extreme urgency and save the country from imminent violent disintegration”, it stated