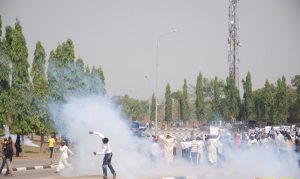 Members of the Islamic Movement in Nigeria (IMN) again took to the
streets of Abuja to protest the continuous detention of their leader, Sheik Ibrahim El-Zakzaky.

The protesters comprising mostly children, young boys, girls and the elderly who came in chartered buses, SUVs and other vehicles chanted various abusive songs as they called on government to release their leader without delay.

The protesters who came into the nation’s capital from the Gwagwa/Karmo/Jabi axis of the city, however, did not have any confrontation with the police. Unlike in the past when the police chased and dispersed them with teargas and water canons, yesterday, the security agents provided escort for the protesters.

The presence of Vehicle Inspection Officers (VIO) notwithstanding, motorists around the Jabi, Utako and Berger junction had a hectic day owing to heavy traffic as they spent hours waiting for the protesters to march past the areas.

Security sources told Daily Sun that the decision not to apply force might not be unconnected with security reports that the protesters were prepared to fight back with dangerous weapons if the police continued their “brutal act.”

When contacted on why the police decided to provide security for the protesters in the last few days, spokesman of the Federal Capital Territory Police Command, Anjuguri Mamzah, said he was not aware that the Shiite members embarked on a protest yesterday.