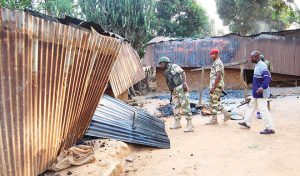 It is another season of wailing and weeping in Benue, Plateau and Borno states as three separate attacks by suspected herdsmen and Boko Haram insurgents sent at least 30 persons to their untimely grave.

Worse hit is Benue where 24 people including children, women and the aged were killed in Omusu-Edumoga, Okpokwu Local Government Area.

The incident came barely a month after the remains of 73 persons killed in a midnight bloody attack by suspected Fulani herdsmen in Guma and Logo local government areas were given mass burial on a site at the Industrial Layout along Naka Road in the state capital.

President Muhammadu Buhari is billed to visit Benue any moment, in continuation of his tour of security-challenged states, to condole with the government and people over recent attacks.

Those killed in the latest mayhem included Eric Attah and his wife, a septuagenarian, Pa Innocent Itodo, an 11-year old schoolgirl and another 60-year-old woman, Mrs. Catherine Abah among others. Godwin Igoche was also said to have lost his wife and two children while another lost his two wives.

The injured are at the St. Mary’s Hospital, Ugwu-Okpoga while the bodies of the 24 victims would be buried on Friday.

Daily Sun gathered that the herdsmen who came in through the Ado Local Government axis invaded the village at about 3pm on Monday. Some of the locals said as soon as they stormed the village, they started shooting indiscriminately and killing people.

Council Chairman of Okpokwu, Olofu Ogwuche said immediately he received a report from the police that some herdsmen lodged a complaint that some people had rustled their cattle in Omusu village, he swung into action and called all the parties together for an amicable resolution of the matter.

Ogwuche said while the meeting was ongoing, he got another report that the herdsmen were already attacking the village. He had  to rush there with security operatives.

“On getting to the village, we were able to recover 17 corpses on Monday evening. This morning, we recovered six other corpses and just while we are here, a corpse of a seven-year-old girl was just recovered while some persons are still missing.”

Governor Samuel Ortom who visited the village for an on-the-spot assessment described the killing as unacceptable.

“We related very well until these killer herdsmen came to invade and kill our people. We will no longer fold our hands and watch. Twenty people killed in one day? This is not right, this is not acceptable. All we seek is justice and justice must be given to our people. Anything outside that is unacceptable

“I am happy the security agencies have gotten some of their (invaders) equipment that can be used to track them. We cannot surrender our state to criminals. We must all rise up and stop this evil that is posing a grave danger to all of us.

“The best they (herdsmen) could have done was to report to security agencies, which they did. What is the basis for attacking innocent people after reporting the matter? Those who rustle cattle are Fulani men and not farmers. How do you come and terrorise innocent people who knew nothing about the matter? We shall do the needful and ensure those who perpetrated the criminal acts are sanctioned according to the law.”

The governor noted that the state’s anti-open grazing law did not discriminate against anyone. He said the law was enacted to protect both the farmers and the herders stressing that anyone who wanted to stay in the state must learn to obey the law.

Ortom reasoned that there was no need to keep the corpses for too long said the local government would be assisted to quickly make arrangement for their burial as soon as possible.

Ortom also urged the youths of the village to team up with security agencies to police the area so that those who had deserted the village could be encouraged to return home soon.

A member of the community, Isaac Ojobo whose elder brother was also killed in the mayhem disclosed that the village had been deserted following the attack.

The Benue State Police Command in a statement signed by ASP Moses Yamu confirmed 16 people killed in the attack.

Daily Sun gathered that one of the deceased was a Fulani cattle rearer who was killed at about 5:30pm. In apparent reprissal, Fulani herdsmen attacked two miners in Gyero village, Jos South Local Government Area, leaving one dead.

Daily Sun gathered that the attacks, which took place at an interval of 30 minutes, threw the entire communities into confusion.

It was gathered that the deceased person died at Eons Hospital, Miango, while the survivor who sustained gun shots and machete injuries is currently in coma at the same hospital.

“There was a culpable homicide and that cause grievous hurt and mischief by killing animals on 5 March, 2018 at about 5:30pm. Information received was that one Fulani cattle rearer whose name and address is not yet known was killed by unknown persons suspected to be Irigwe people. About 15 cows were also killed at Rafin-Bauna Area.

“On the other hand, information received also reveals that at about 6pm, of the same day, two Irigwe youths while returning from mining were attacked by Fulani herdsmen. As a result, they sustained various degree of injuries and were rushed to Enos Hospital, Miango, Bassa Local Government Area for treatment.”

Terna said investigation was ongoing to ascertain and assess the incident while intensive patrol of the general area is being sustained by security agencies to avert further killings.

The incessant attacks by suspected Fulani herdsmen have been flayed by Nigerians who are demanding that the president arrest and prosecute the herdsmen involved as well as pronounce herdsmen as a terrorist group.

Also, the Police yesterday confirmed the death of three Civilian Joint Task Force members after a suicide bomber with explosive devices strapped around his body on Monday night detonated himself at a crowded Muna-Datti area of Maiduguri, Borno State.

Police Public Relations Officer in the state, DSP Joseph Kwaji, in a statement said 17 people were also injured in the attack.

“On Monday, March 3 at about 2030hrs, a male suicide bomber riding on a bicycle detonated IED strapped to his body at Muna Datti area, killing himself and Three Civilian JTF members while 17 people were injured,” Kwaji said.

He added that the Explosive Ordinance Device and patrol teams have visited the scene for an on-the-spot assessment.

The victims of the attack, he said have been evacuated to the University of Maiduguri Teaching Hospital.

The police also gave the assurance that normalcy had already been restored in the area.

Muna Datti is one of the communities in Maiduguri that has been plagued by series of suicide bombing by Boko Haram insurgents.

Meanwhile, the Kingdom of Saudi Arabia has donated the sum of $10 million to Nigeria to aid the fight against the insurgency.

According to the team leader from Saudi Arabia, the donation is part of the King Salman Humanitarian Aid and Relief Programme.

The team leader, Kingdom of Saudi Arabia Defence Ministry, Nasir Mutbak, on Monday, told journalists that the donation is expected to aid the provision of food and other basic amenities in IDP camps in the Boko Haram ravaged North-East.

Minister of Defence, Brigadier General Mansur Dan (retd) who received the team from Saudi Arabia said the fund would go a long way in helping to fight terrorism in the country.(the sun)